Passerbys dive for cover in shops 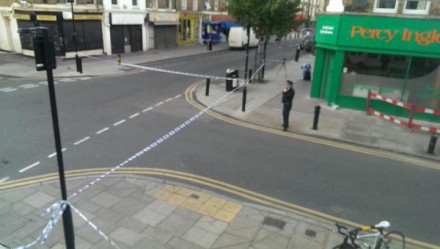 A  police investigation has been launched following a shooting this afternoon on Chatsworth Road.

The victim, described by police as a 25 year old man, was found suffering gun shot wounds and was pronounced dead at the scene.  Police say they were called at 1:14 pm today (26 September) to reports of gun shots on Chatsworth Road.  Officers arrested a man in his 20s close to the scene, on suspicion of murder. He currently remains in custody at an east London police station. The victims next of kin have been informed and a post morten is due to be scheduled soon. 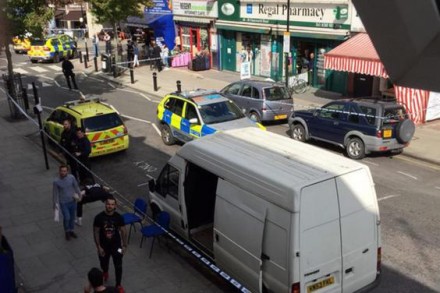 Witnesses on the usually busy high road say they saw the man being chased by a group before he was shot, and watched as he ran inside Mighty Meat Butchers briefly before collapsing outside. Passerbys are said to have ducked into various shops along Chatsworth Road when they heard the gun shots, while some workers at various establishments, locked themselves in.

One eyewitness told the Evening Standard: “I’ve never been so scared for my life… I was really, really scared.

‘We thought it was kids throwing fireworks outside. Then one of my colleagues whose boyfriend deals with guns went: ‘Oh my god, that’s a gun.

‘We all ran into the back and closed the door. The police came straightaway and said all the shops had closed and the area was cordoned off. I just saw people running”.

In recent years, Chatsworth Road and surrounding area has undergone a bit of a change, with a range of trendy businesses moving in, rent sky rocketing as well as house prices.  But even that hasn’t stopped the occasional shoot em up bang bangs.

As a result of the ongoing forensic work, Chatsworth Road Market, will not convene on Sunday 27 September.

Anyone who witnessed the shooting or the events leading up to the incident are asked to contact police on 101 or Crimestoppers on 0800 555 111.