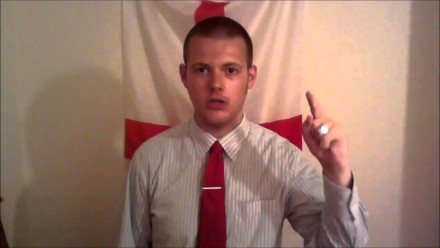 The pitiful weasel Joshua Bonehill, may have had his ban from anywhere within the M25 extended to mid April. Initially it was until March 26. It also appears his collaborating dunces in arms, have been so scared off by recent visits from the plod, that they have all abandoned their plans to spout their hate on Upper Clapton come March 22 as planned. That is if we are to believe him, since there is no confirmation from the authorities.

According to his blogs, 3 of his 5 “principles” have been arrested and banned from entering London. It is very possible Bonehill, a known pathological liar, may be using these reasons to save face. I mean lets face it, it was very doubtful from the start that his “Liberate Stamford Hill” protest would come to fruition, since just about every far right group throughout Europe and America see’s him as a sorry joke and have distanced themselves from him, many mocking the self-proclaimed leader of a juan man band.

The planned White Man March by the National Action group (another far right group) in Newcastle Upon Tyne, the day before his Liberate Stamford Hill rally.  Fear of being “murdered by Jews and antifascist” in Hackney Bonehill has also been cited as one of the reasons why having another protest the day after, was not sustainable. Personally I think the few who may have had plans to show up would have gotten lost and probably ended up outside a place some of them are familiar with, Standford Hill Prison in Kent, similar to what recently happened to a German neo nazi group.

Still, the convicted fraudster and unemployed, work shy 22-year-old from Yeovil, Somerset, vows the rally will go ahead in May.

Without any responsible organisers set in place to lead Liberate Stamford Hill on March 22nd, it makes it impossible to co-ordinate an event without the risk of people getting hurt or murdered by the Jews or antifascist. We have also taken into consideration the fact that White Man March occurs the day before Liberate Stamford Hill and this makes it impossible for many activists to travel to the two events without incurring extreme transportation fees.

Therefore it has become necessary to postpone Liberate Stamford Hill until the date of Saturday May 2nd, 2015. We will be putting out advance publicity in the coming months but in general principle, it makes sense to postpone the event so we can ensure higher numbers of attendees and make sure that the safety of our activists is placed first.

Liberate Stamford Hill has to go ahead, it is our democratic and free right to oppose the Jewish Shomrim police by means of peaceful demonstration and we will not back down in the face of state oppression or tyranny