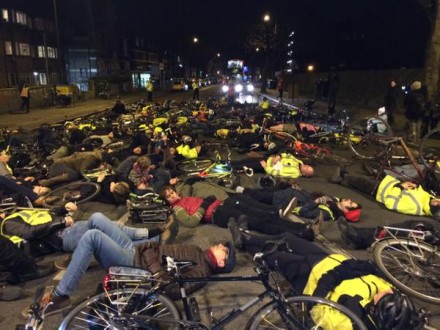 “Die in” held on Amhurst Park Road for Stephanie Turner.

Tributes continue to be left following a vigil and two-minute “die-in” held last night, at the spot cyclist Stephanie Turner of Tottenham Hale, lost her life a week ago as she navigated a left turn into Amhurst Park Road from Seven sisters Road on her way to work last Tuesday.

Though not attended by family members, they were aware of the vigil and did not object but issued a touching statement through the Met Police yesterday:

We are utterly devastated by the loss of Stephanie, our beautiful daughter; sister; fiance and friend. Trying to find words with which to describe her is such a difficult task as the kind of person Steph was seems to defy definition.

She ran marathons and climbed mountains. She was the life and soul of every party and lit up every room she entered. She was hugely admired by so many people for so many different reasons.

Steph studied Physiotherapy at Teesside university where she became an integral part of the University life. After graduating she went on to become part of the physio-team at North Tees Hospital, more recently working as part of the Community Independence Service at the Central London Community Healthcare NHS Trust. Steph adored her work as a physiotherapist and took great pleasure from being able to help so many people.

Steph was an experienced cyclist and accomplished athlete who everyday not only cycled to work but also to see her patients in and around central London. To Steph, cycling was much more than a means of commuting: it brought her real excitement and satisfaction and allowed her to feel truly connected to London, the city she had come to love and live for.

She regularly spoke of her feeling of connection to London’s cycling community, who we know will be left reeling by this tragic incident on such a widely used cycle route.

Stephanie’s studies, career and interests took her all over the UK and people from everywhere from the North of Scotland to her beloved home-town of Paignton, Devon have been left heartbroken this week.
Steph and her fiance, Ian had so many plans for the future which would inevitably, with Steph involved, have brought so much joy to everyone, especially her parents, Steve and Linda, her sister, Suzy and her wider family and friends who so loved her.

Steph’s spirit was effervescent and absolutely infectious. Her open and outgoing personality drew people instinctively to her but equally she shunned the spotlight and valued her privacy and her family and friends would greatly appreciate that this was respected in this most grievous time.

Stephanie was mercurial. She was one in a million. She was, as a close friend said, a pea from her very own pod. A huge hole has been left in our lives.

A friend of Ms Turner, Getter Jostmann who attended, wrote on the Stop Killing Cyclists Facebook page: “Thank you Nicola. We were there tonight and it was moving. Especially the lie down for 2 minutes.
Steph would of loved it.” 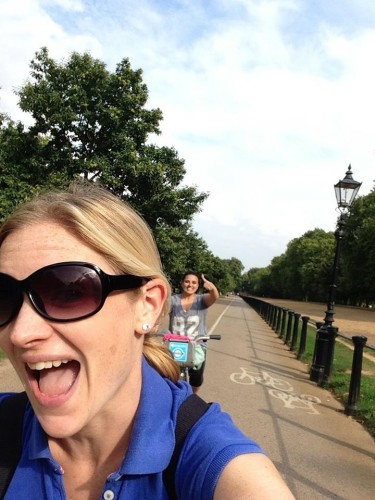 Another friend Natasha Darbar-Woodland, who did not attend as she lives in California posted a photo of her and Ms Turner riding in Hyde Park wrote:

Hi all, I hope you don’t mind me joining in the conversation as I just saw this. Steph was one of my best friends for the last 12 years, she was an amazing person who loved to cycle. I currently live in the USA and when I came home to visit in September we went on a day out in London.. During our day out Steph made me hire one of the Barclay London bikes and we cycled all round London and she loved it And it was and amazing last in person memory to have. She was an outdoor person that loved to do anything that involved outdoor adventure, in fact her fiancé proposed on the top of a mountain after a long day of hiking I think it was Ben Nevis. Her smile was infectious and she didn’t have a bad bone in her body.. And amazing soul this world has lost but she will remain in the hearts of so many friends, family and all those that she has touched. But what I really meant to say is thank you. She had An amazing talent of being able to bring people together from all walks of life and would be so honored that so many people came out today to honor her and to possibly help prevent this happening to another cyclist. We are all grieving our loss in many ways and while her friends and family may not have been present (it is to heart breaking to think about it or go near the area) I personally Think it is a lovely thing you have done and I promise you she is smiling down and very proud of each and everyone of you that represented her today… Thank you again xxxx

Hackney Council is looking to make improvements in the vicinity and are considering making changes which includes, the narrowing of Seven Sisters Road as well as reducing the speed limit to 20 mph.

Stephanie Turners death was a bigger blow to her family because her sister Claire Widdicombe lost her life while giving birth in Devon last September.  Her son, Jay, was still-born.