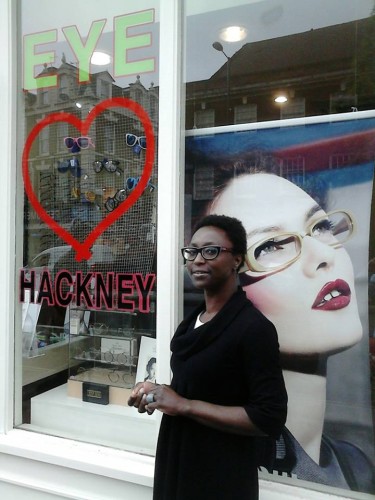 As if being looted and having your store wrecked by looters during London’s summer riots in 2011 wasn’t bad enough, the owner of EYE London, an independently owned opticians on Mare Street, claims she faces the possibility of being swallowed up by national chain, SpecSavers, before long.

Eight years ago Margaret Asare set up her optical practice EYE London Opticians, based at 312 Mare Street. Almost 4 years ago, her store lost close to £40,000 in stock and shop fittings but through the Mayors Riot Fund and help from Hackney Council, the business was rebounding. Then earlier this year, along came SpecSavers, a high street giant who moved in next door to her practice and store. ” At a time we should be growing as a business we can’t, our growth has been stunt by an international company with name recognition and an advertising budget like no other” says Ms Asare, 46, who attended Kingsland Secondary School, since rebuilt as the Petchy Academy in Shackellwell Lane, Dalston.

Asked if she didn’t feel the same competition from the Boots opticians several doors down from her store, Ms Asare said: “We came to an agreement when I opened in Mare Street, not to offer the same deals”

Ms Asare who has a combined 25 years experience of working for various opticians across London and owning her own store, told me: “People think independent opticians cost more than the popular corporate High Street brand stores, but that’s not true. By the time they add on all the extras it can amount to more or the same as ours.  We hope the community will give EYE London a chance by visiting our store. We also offer NHS eye care to those in receipt of benefits or suffer from certain ailments”.  She added:  “we also have late night Wednesdays.”

The opticians four doors away at 318 Mare Street, formerly Donald and Atchison before they merged with Boots,  has been trading in the same spot for 25 years, which begs the question, why would SpecSavers open an opticians in such close proximity to two others on a high street, where merchants struggle for business?  It’s not like there is a shortage of units to let along Mare Street. I put this to Jayesh Maru, Director of the Specs Savers on Mare Street who also owns the Dalston and Bethnal Green Branch. His response was the standard corporate response which came via SpecSavers PR people:

Specsavers is a partnership of locally owned and run opticians. It has been serving the East London community for more than 15 years. Myself and fellow director Rupesh Halai own the Mare Street store and the Specsavers stores in Bethnal Green and Dalston.

‘One in three of the customers at our store in the Kingsland Shopping Centre live closer to Mare Street so we opened a store in Hackney to be located closer to our customers in the area. We have a long history of good relations with a number of fellow opticians in Dalston and Bethnal Green based on a mutual understanding to help avoid conflicts of interest.’ 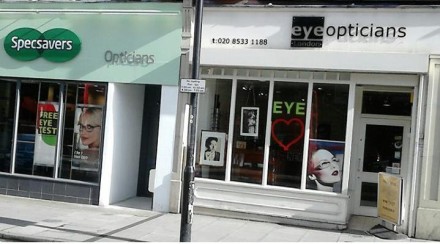 One would say fair game, they can open wherever they want. But right next door to a small independent business, this from the same company that claims they have good relationships with fellow local opticians as a way of avoiding conflicts of interest?

You can’t get a more in your face and “we are here to squash you” message than that.

Yet I get the feeling from speaking with them, they are still incredulous to what their impact is on EYE London or as I believe, they do know and are counting on there being one less optician on Mare Street.

Margaret Asare describes Mare Street as a “thoroughfare people use to get from A to B” and wishes the  High Street will see the same revitalization as other Hackney High Streets, such as Chatsworth Road, Broadway Market and Stoke Newington Church Street.

Even the highly trumpeted pedestrianization of the Narrow Way has not helped trade along Mare Street, which leaves Margaret Asare pondering on the future and she wonders if generous incentives to attract new business owners would help revitalize trading on the street.

I’m guessing that would exclude any new optician within a mile of 312 Mare Street? 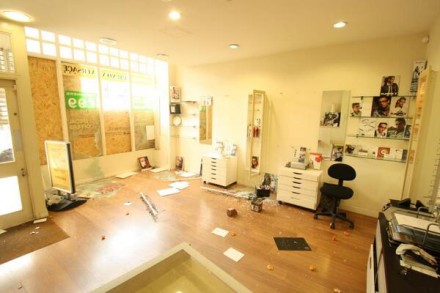