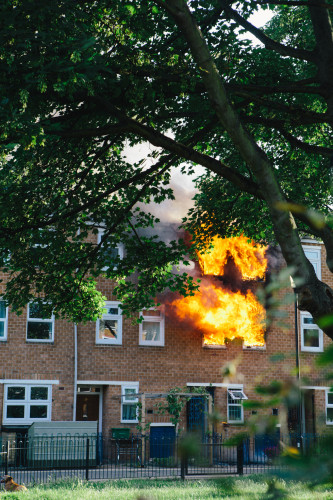 Fire was brought under control in just over 30 minutes.  Image courtesy of Jonathan Bell

A fire broke out in a Hackney Central maisonette this evening at approx. 6.43pm,  just hours after the London Fire Brigade walked out on a 24 hour strike over pensions and retirement age.

Emergency Fire Contingency Crew of four engines, brought the fire in Malpas Road under control by 7.19pm and nobody was injured.

The cause has not been determined and it is still under investigation.

The blaze also erupted on the same day the Fire Brigade issued a warning about cooking under the influence ahead of the world cup.

The Brigade is encouraging fans who might be feeling hungry after a few pints to order a takeaway instead of running the risk of burning their house down.

The Brigade’s stats from the 2010 South African World Cup show:

• There were 620 house fires during the month-long tournament – around 20 a day.
• Half of those were in the kitchen, with 40 per cent caused by cooking being left unattended.
• There were 65 fire related injuries, one for every game played.

An extra 2.2 billion pints were sold during the last World Cup and the Brigade is concerned that there will be an increase in alcohol related cooking fires.

Fire chiefs have today launched the World Cup Takeaway campaign aimed young professionals – who cause more than a quarter of all accidental house fires in the capital, often by attempting to cook at home after having had a drink. This greatly increases the risk of someone having a serious fire which could destroy their home or, even worse, kill them.

The Brigade’s campaign urges people to grab a takeaway during the World Cup and features adverts which have been translated into Italian ahead of England’s crunch fixture on Saturday.

*** There is no indication this evenings fire was a result of intoxication.