Hey, don’t even think of coming to Canalival

It doesn't exist in any form. Last years destructive bacchanal on Regents Canal’s Haggerston/Shoreditch/Dalston/Broadway Market stretch, threatens  to return this weekend if some irresponsible revelers have their way, despite calls from the folks at the Canal and River Trust and the Met Police.

If you recall, despite the Canalival Organizers cancelling it in 2013, following advise from the police, Hackney Council and the Canal and River Trust, it went ahead with thousands of yahoos launching their rubber dinghies. The result of the day long drug and alcohol fueled nautical (if you can call it that) soiree, was an utter chaotic mess with dinghies, broken glass and all sorts of debris left strewn in the water, the banks and outside residents homes by revelers who were void of any responsibility or concern for nearby residents, flora or fauna.

That same weekend Ella Kirby who lives nearby wrote on the organizers Facebook page:

“The Suffolk Estate behind Broadway market was used as a urinal, even the DOORWAYS to our stairwells were used by women as toilets.

“I saw one girl urinating quite literally on someone’s doorstep (that person has young kids). Please bring a bucket or hosepipe and get rid of the public health risk from our estate”.

Although the bash doesn’t appear to have any sort of organized body this year, there are a handful of closed Facebook groups for determined Canalival revelers.  While pleas from Hackney police and the Canal and River Trust, appear to have been heeded, it’s also gone unheeded, with some vowing to show up.

@tim1882 the message from @CanalRiverTrust is fairly unequivocal – they won’t be allowing #canalival – we will be there to support them.

The Canal and River Trust issued a statement that included:

This weekend we’ll be installing fencing along this stretch of canal and working closely with Hackney Council and the Metropolitan Police to make sure this event doesn’t go ahead. Action will be taken against those who attend.

On Twitter, a trainee solicitor goaded the Canal and River trust:

@CanalRiverTrust I’m curious as to what ‘action’ you can actually take against attendees of #canalival ? My guess is none.

Others have tweeted their intentions:

Warming up my u-boat for Canalival.

Someone tweeting as Milly Sloan from Wandsworth was adamant the bash should still go on, portrayed residents, These are who get hurt the most.

the canal trust folks and concerned people as “whingers” claiming her parents Oxfordshire home is near to the Riverside Festival, which is held in Charlbury every other year and no one had a problem. She omitted the fact The festival in Oxford is held on a much bigger area with the river fenced off for the event. The sites are incomparable.

I have a feeling Milly Sloane won’t be anywhere near Hackney this weekend. Just more hot air bravado from a clueless nitwit.

Have fun whatever you do this weekend, just don’t bring your crap to Regents Canal. Oh and check out Events Gigs n Things. 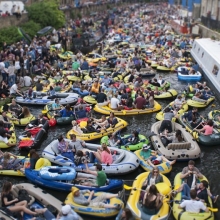 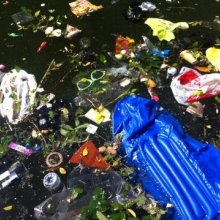 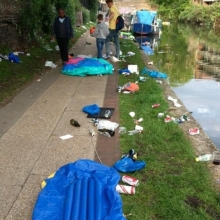 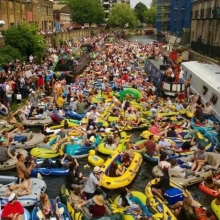 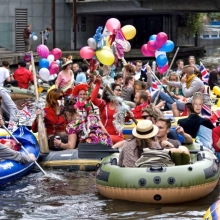