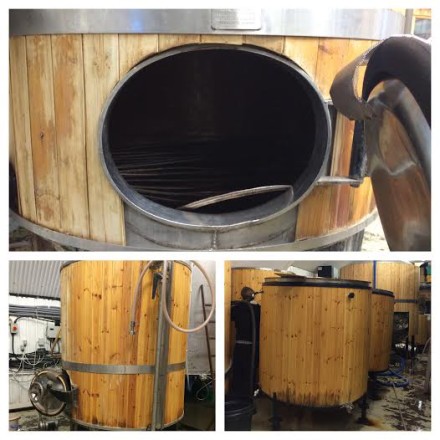 Beer is far too broad a name in craft beer-crazy London these days. The more artisanal versions of the beloved brew have become hugely popular in the last couple of years, and East London seems to be the place where this explosion has been most happily welcomed. An integral component of the hipster package, craft beers are ordered, sold, degusted and discussed just about everywhere you go now, and I’ve often felt quite left out when I wasn’t able join in conversations where the lexicon involved ‘malted’, ‘hops’ or ‘fruity and hoppy but also quite sharp’. Say what? I hate feeling left out and I love beer! Oops, I mean, lagers and ales and the occasional stout

This combination of sentiments took me to London Fields Brewery where I signed up for a tour of the brewery followed by a beer tasting / food matching session. The meeting point is the Tap Room, London Fields Brewery adjacent bar where we had our first beer of the night, the Shoreditch IPA. Nice and cold. Unfortunately at that stage those were the only two adjectives I could come up with to describe it. I was hoping that by the end of the evening I would be able to be a little bit more articulate about the brews. So, to the tour. It is conducted by the knowledgeable and likeable Phil and there were about 10 of us that evening: my companion and I and a group of staff members from the Hackney Recycling Team having an off-site-work-do-thing, which I thought was a brilliant idea.

During the tour we learned about the roles that grains, yeast and hops play in the beer making process. We were shown the equipment used and their functions; we got to taste a few grains of malted barley, handle the hop bud and from its sharp aroma, get a sense of its contribution to taste. After the tour, we were moved to Tap Room again and boy, all that influx of beer information made me positively thirsty! We got to taste three of their beers and a small plate of nibbles accompanied them. I have to say, the food could have been a little more exciting; perhaps the name ‘beer and food matching’ is a little misleading as I was expecting specific foods to go with specific beers. Or perhaps I was just too hung up on the wine tasting / food pairing format. But being a beer novice, I just went with it.

It’s incredible how a little background knowledge enables you to be a lot more perceptive about the individual characteristics of each beer. The first one to come was the wonderfully named Love Not War, a red ale with a silky texture, that tasted well rounded and carefully balanced in terms of malt and hops. It was first brewed during the London Riots, hence the name. Our second beer was the, again, wonderfully named Hackney Hopster, a pale ale. It was served a little bit warmer, as per the British tradition. This is because, according to Phil, cold temperature dims the flavor of ales. And what a flavour! Definitely my favourite beer of the evening, very fresh, dry and really floral; I could easily taste the hops nicely overpowering the malt. Our last beer was a classic German style weizen doppel bock. Confession time: I’m not a fan of wheat beer and the tour unfortunately didn’t change that a bit. All I can say about this one is that it was, how can I put it, wheaty.

It is easy to understand the appeal of craft beers. There is something rather satisfying about drinking a beer that was produced just over there, by brewers that are “allowed to flex their brew muscles and encouraged to be creative”, Phil told us. Craft beers provide discerning drinkers and beer lovers with a lot more choice and a multitude of flavours. I’m a convert.