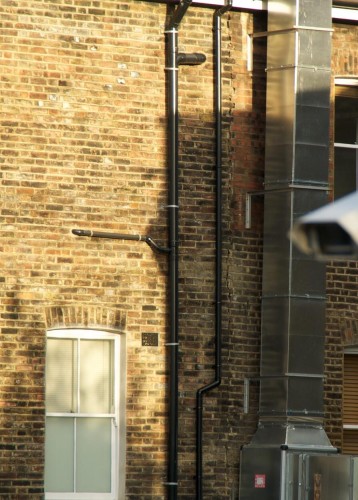 Crack at the rear between the flue and the drainpipe. Click image to enlarge.  Photo:  Nick Perry.

Hackney will soon be loosing a much treasured building and one of it’s oldest landmarks this week, but some residents are speaking out via social media over concerns they have had for a long time.

One Hackney resident, Pete North claims he has been so concerned about the  general safety of the site, especially the lack of fencing, that he recently contacted both Hackney North & Stoke Newington MP, Diane Abbott and Hackney Council.

This is the site they are excavating next door of? I already complained about unsafe site @BBCTravelAlert @joshspero pic.twitter.com/KAaoxWseGF

Stoke Newington resident Nick Perry, who is a trustee of the Hackney Society and Chair of Clapton Conservation areas, gave about the best blow by blow commentary throughout the day via Twitter, based on information he gleaned from what he described as “knowledgeable” people also present at the scene.

The front crack is clearly visible above the drain hopper. The parapet slopes gently down. #Gibbons #Hackney pic.twitter.com/XtjARhfNM4

This is the massive crack at the boundary of the development site at 7-19 Amhurst Rd. #Gibbons #Hackney pic.twitter.com/h9hDLDzHp6

A further crack about 5m nearer to the front elevation is vertical and extends in to the old concrete underpinning. pic.twitter.com/M4N3Wxlpw7

.@duchessofackney Nowt 1st hand. Movement was last night. A window cracked and it was sufficiently scary for them to call the fire brigade.

Its still standing at 10:00am pic.twitter.com/fOnHI2sRyj

Great building. Will be a los to Hackney Central. pic.twitter.com/LnzzR8HIcf

This morning a Hackney Council spokesman acknowledged the sudden and unpredicted situation, telling Hackney Hive:  “One of our priorities today is to ensure occupants safely remove their belongings”.

They anticipate the controlled demolition of number 5 Amhurst Road tomorrow (Monday, 25 November).  Yesterday occupants were told to leave with what they could carry, with the assurance that cherry pickers will retrieve small belongings once the roof is removed today.

Following the demolition of number 5, an assessment will be made on whether the damage was contained to that one property, and whether it is possible to save 1-3 Amhurst Road, which houses the Cirrik restaurant, The Raw Duck and four residential properties above. Scaffolding began to be erected on Saturday in preparation of  the demolition.

The building survived a fire in 2003 and two world wars.

For any changes, visit the TFL web site.

4 Responses to "Gibbons Building demolition: Concerns over Amhurst Road terrace is nothing new"