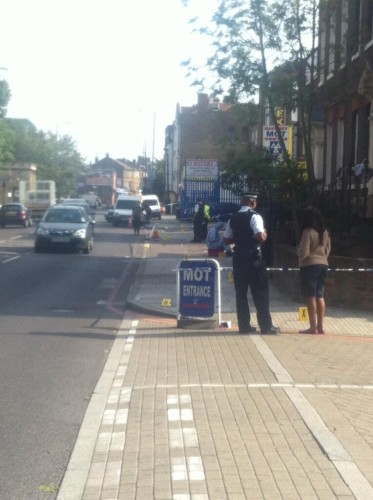 The area was cordoned off for most of Sunday.

Police were called after shots were fired during a party at 160 Homerton High Street this morning at 5.20 am.

Three people; two men aged 24 and 26 and a woman aged 33, were taken to hospital where one of the men is said to have life altering injuries. The second man and woman are in stable condition. None of the victims have injuries that can be describe as life threatening.

No arrests have been made and officers from Trident Gang unit are investigating.

Local residents and business owners expressed their concerns for what they described as “out of control raves” held at weekends but of late, also during the week at a unit in Bison House, which is the the home of Crossway Church. It is thought the Church headed by Pastor Olusegun Awe,  rents out the unit to promoters for organized parties that charge an entry fee. The pastor told Hackney Hive he was unable to comment at this time.

Monica Ogungbola who co-owns Eko Restaurant which is in front of the building the shooting took place, told Hackney Hive: “People have being saying it’s only a matter of time.  The parties go on past our closing time and the guests cause havoc.”

Ms. Ogungbola added: “It’s got to the point that even our customers can’t park and are often blocked in. People park and there have been times I can’t get my car out. One morning some of them carried their partying to the front of the furniture store next door. They were barbecuing at 3 am in the morning on the pavement!”

A nearby resident who doesn’t want to be named, said: ” I wasn’t surprised to hear of the shooting, but appalled a church would allow its premises to be used for these types of activities. The smell of weed is always strong in the air.”

Anyone who was at the party is or who has information about this incident is asked to call police on 101 or call Crimestoppers anonymously on 0800 555 111.