Theatre Review: The Blind and The Intruder 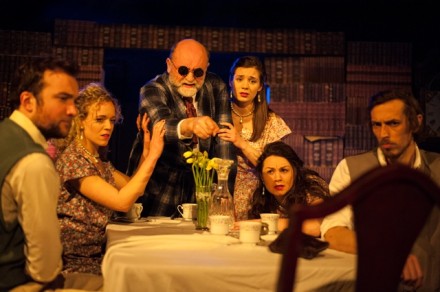 The Blind and The Intruder at the Old Red Lion Theatre, Islington, are rare classics by the Belgian Nobel Laureate Maurice Maeterlinck and have been given a new spin by Tarquin Productions.  Their aim is to bring forgotten classics back to the London stage with all of the contemporary influences and capabilities of the modern theatre.  This production is edgy and the stage design is exceptional.

The first thing that struck me when I walked upstairs at the Old Red was the set. Many kudos must be given to Designer Jacob Hughes and his team for creating an incredibly well-designed , detailed and atmospheric set. This standard would follow as well for the set done for The Blind.

The two plays are done back to back starting with “The Intruder” which is set in the living room of a home. The ensemble is strategically placed around the table . There is the youngest daughter Ursula (Gina Abolins) who is reading to her Grandfather (John Canmore), The Father (Darren Beaumont) who is sat at the table drinking and playing cards with The Uncle (Rupert Baldwin) as well as the other two daughters Gertrude (Helena Payne) and Genevieve (Saskia Roddick) . They are all deep in thought and there is very little light in the room. They are also concerned about their ill mother who has given birth and is now sleeping in the other room. The daughters continuously exchange worrying glances and the audience is given a sense that something is not quite right. The idealic scene of a house in the country overflowing with books and the  radio playing 1920s jazz standards is burdened down by the weight of this heavy anxiety and tension. What is it? Where is it coming from? The grandfather starts to question repeatedly “Where is the sister?” With each inquiry the tension builds which was mostly propelled by John Canmore’s tenacious performance. Why does he continue to ask after this sister ? What will she tell them when she finally arrives?

I couldn’t tell you how it finishes as that would completely ruin the whole experience.  It’s a suspenseful theatrical experience which is driven by a cast which is completely attuned to each other and the piece.     Maeterlinck’s work is similar to Becket as there is a deep appreciation of silence.  It’s a piece which seemingly nothing is happening and everything is happening.  There are even strange and random moments of incestuous glances between the Uncle and his nieces.  It all culminates in a final crescendo with the audience left in its shivery aftermath.

In “The Blind ” we witness eight blind people who are lost after being taken on an excursion by their priest who subsequently abandons them.  We find them sitting waiting for his return. The characters are not given names but more symbolic ones like The Realist, The Romantic , The Fantasist, The Pragmatic etc. Director Benji Sperring had the actors be completely blindfolded which required them to rely on their other senses as they move around the stage.   It was amazing to watch as they moved all in sync and it also raised the stakes a bit of the piece.  The set was once again phenomenal .  There are pages and pages of books which looked like they could have been torn out of the ones in the  previous family’s country home in the Intruder.  Not sure if that was a connection that Hughes and Sperring wanted to make but I certainly felt it.  Above the characters heads are strobe lights and they are surrounded by broken furniture. Damaged pieces of  black iron shelves  were used as a sort of  framework of the set with the priest in a black cloak hanging  in the corner. It is spooky to say the least!

It is a work which requires the audience to read a lot between the lines and do a bit of interpretation  work themselves.  Maeterlinck’s writing is steeped in the symbolic tradition and although it might not seem accessible I think this production brings it to life.  Themes of being powerless and feeling lost are certainly evident but also there is a wider connection to humankind’s desire for a relationship to something greater.  If you are a fan of Beckett’s work then do not miss this rarely-done piece of the theatre.

On till the 28th of April at the Old Red Lion Theatre near Angel Station.   For more on Tarquin Productions please visit, www.tarquinproductions.co.uk