A tale of sabotage, Eko Nigerian Restaurant, Hackney Police and the Hackney Gazette 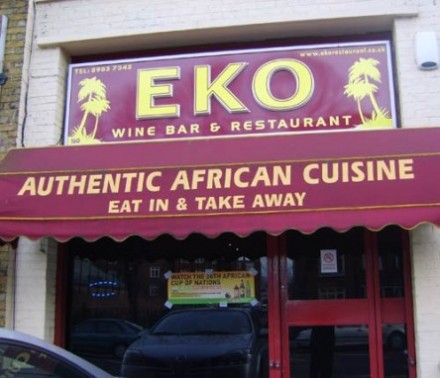 I moved back to Hackney in 2009 after nearly two decades of living in North America,well 18 years to be exact and four years living in another borough. It’s changed a helluva lot and soon will be unrecognizable from the place I couldn’t wait to leave in the 1980’s. Just a few days ago someone on twitter was convinced Hackney will be in the hands of the Tories at some point soon….not that I’m loosing any sleep over the thought.

But what is increasingly worrying me, is a disturbing trend I have noticed, involving the targeting of certain businesses in Hackney, usually owned by Black s or minorities.  What’s even more disturbing is what I believe is an effort to push out or close down these minority owned businesses, as a result of the gentrification of Hackney.  Some sites are seen as very desirable for people looking to invest in Hackney and Black owned small businesses can be easy prey and considered not “unique” enough.  Ethnic business owners in burgeoning arty and gentrified bound areas, ripe for speculators looking to buy property or set up their “unique” businesses, are getting shafted by the council and police.

The businesses thrown out from Railway Arches to make room for Hackneys new Fashion Hub have been left high and dry after years of being there. In fact one owner, 61 year old Christopher Mautsi, was told his automobile repair centre he ran for two decades was not “unique” enough to be saved or given alternative premises.  Not so, for a collection of artists who were given affordable work spaces because they make a “significant contribution towards the economic vitality of the area.”  Mautsi, had a staff of six and took on 2 apprentices every year.  Last heard of, this man who had worked so hard and who made a contribution to Hackney was claiming benefits.

Eko Restaurant on Homerton High Street is a business I am very familiar with, family owned and ran by Steve Ajayi and Monica Ogungbola, who have worked seven hard years to build their business and their reputation.  It’s  a place I’m always guaranteed a big hug from Monica when I walk through the door, and  it wasn’t surprising her first words when I called her two nights ago were, “where have you  been?”  I told her I finally nailed making a  halfway decent pot of efo-egusi stew, a Nigerian dish usually accompanied by pounded yam, eba or amala. I also need to trim more than a few inches from my waist.

On Tuesday I learned from reading the Hackney Gazette web site, the restaurant had been the subject of a licensing review brought on by Hackney Police, who used a street fight that took place near the restaurant in November 2012, as reason.

From reading the report in the Gazette, one would think Eko was the type of place trouble makers congregated. Nothing could be further from the truth. When I spoke to Monica and Steve on Tuesday night, both insisted, the fight had nothing to do with patrons of their restaurant and explained it took place a few doors away near the used car dealer on the corner of Sedgwick Street and Homerton High Street.

On 18 November 2012, following a disturbance, police where called to Homerton High Street in the early hours of the morning.  Some men had gotten into a fight near the corner of Sedgwick Street and Homerton High Street and NOT in front of Eko as police claim.  The police report written up by the investigating officer, PC Guy Hicks stated:  “Council CCTV showed several men emerging from the venue in Homerton High Street to start a scuffle in the street – and at least two of them were seen holding knives.” Yet nobody has been been able to produce the video to prove this. I understand Councillors on the Licensing sub committee meeting also asked for it, it but it wasn’t produced and won’t be, because it’s a load of codswallop. Steve Adjayi pointed out “There are two pubs close by, the people involved in the disturbance could have been from anywhere, but they were not from our restaurant.” 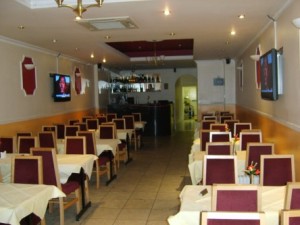 Eko is a well run establishment. A restaurant families go to, it accommodates wedding receptions, birthdays, church socials, live music some weekends. A place you go to on a Saturday afternoon to catch a football game on big screen. It is not a place gang bangers hang out and I know for sure Steve, Monica and their staff would never entertain that type of “clientele”.

Police claim they went in the restaurant to request Eko’s CCTV footage, but couldn’t view it because neither owners didn’t have the pass code, but were promised it the following day.  They didn’t have much luck the following day nor on the third visit when the police claim they “seized” the hard drive.  Not that Monica and Steve cared one bit. What the police report never mentioned was that Steve gave them permission to take the hard drive when they first requested footage. He had nothing to hide.

Emma Bartholomew reporting for Hackney Gazette, wrote “police eventually seized the CCTV unit’s hard drive and quoted part of the report “Upon viewing the hard drive, a female can clearly be seen in the venue taking an infant in arms into the rear of the restaurant at the same time as the incident is occurring at the front, this was approximately 3.40am.” I guess that was added for maximum effect. What PC  Hicks didn’t acknowledge, was that the woman was a very frightened woman who had driven to the restaurant to pick up her husband, and parked in front of the entrance, when she saw the commotion going on.

What is frightening about the investigation, the report and the council involvement, is that Eko and its  owners are now under the radar of police and will be targeted.  And for anyone who has never been in that unfortunate position, let me tell you, it opens you up to a shed load of things. According to Monica, the council/police CCTV cameras  now points to her business starting at 7pm every evening.  For Monica it’s been a learning curve, she told me “You have no idea what a weight this has been on all of us. It’s been a nightmare.

“I always chastised my children when they would say they didn’t trust the police.  They would tell me about things that happened to their friends and I always thought they brought it on themselves, little did I know they had good reason to be suspicious.”  I don’t know about you, but I find it incredibly sad, that parents who should be teaching their children right from wrong, will have to teach them to be suspicious of those designated to protect and serve the public.

Today is Thursday, the Hackney Gazette print edition  hits the streets and no doubt, this will appear in it, further damaging Eko’s reputation. Fortunately for them, their loyal customer and the Nigerian community know the real score.  Gazette reporter Emma Bartholomew did interview the owners of the restaurant, but never included their allegations in fear of being sued for libel, her report was based on Hackney Council and police documents.

The councils licensing sub committee did not revoke Eko’s license, but have added conditions, 24 of them which you can read here.  One that really bothers me most, is item 9. “The premises will also, in co-operation with Hackney Police, regularly facilitate a premises drug audit using the Ion Itemiser or similar device” –  This cloud of suspicion criminalizes the restaurant, owners and patrons.  Random drug testing? This for an establishment s of 7 years with no prior history of trouble or drug activities???? Why??? Eko is not the sort of place you go to snort blow off the cover of a septic tank or toilet seat. The trendy and hipster venues and pubs in Shoreditch, Hoxton, Dalston and everywhere in between has that activity covered. Eko is frequented by consultants and other staff from Homerton Hospital and the guys from the fire station across the road pop in occasionally on a Friday after their shift for a bevvy.

The idea that such an establishment should have signs prohibiting drug use on the premises, is just wrong. It lowers the tone of the restaurant and I hope  they challenge it.  Item 12 was just as ludicrous.  There will be no alcohol promotions; eg ‘Happy Hour’ or ‘2 for 1’ .  I don’t ever recall them ever having any type of drinks promotion.

The only things Eko maybe guilty of is being a little sloppy in not being clued in on their own security cameras operation and it’s noise level after closing time. Even so, its immediate neighbours are light industrial and a fire station, which are not affected.  The people across the road in the council estate have double glazing and are far off the road not to be disturbed. Folks living on Sedgewick Street and Mackintosh Lane I’m sure encounter a degree of noise level that comes from car doors and and engines, but you know what, I’ve never crept out of a venue on tippy toes, giddy and happy at 4 am after having a blast of a time.  And speaking as someone who is half Nigerian, yes Nigerians can be a little loud when speaking their various languages and have a tendency to do seriously long good-byes.

Just yards away from Eko is Brooksby Walk.  A few days after the summer riots of 2011, an “anonymous” tip (they are always anonymous aren’t they?) claiming looted goods on the property, led police to Brooksby Snooker and Community Centre. No stolen goods were found.  The venue was also Black owned and was the subject of drug raids that always failed to yield any drugs on the premises. The centre is now closed, but before it closed, I read several reports that were made by a nearby resident, who had an almighty hard on for the centre. His biggest beef was the “black men that hanged out” outside the venue. I guess he felt intimidated?  While the centre may have attracted a different caliber clientele from Eko, it was also hired by different groups for functions.

I don’t want to see Eko suffer the same harassment by private citizens, the council or the police.

15:26 Thursday: Some corrections have been made to reflect clarification from Emma Bartholomew about her phone contact with the owners and Steve Ajayi who clarified who the woman with infant was.

5 Responses to "A tale of sabotage, Eko Nigerian Restaurant, Hackney Police and the Hackney Gazette"