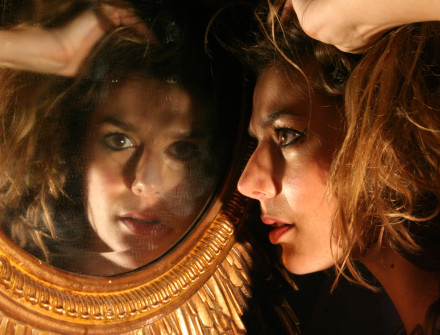 A fluid one woman performance  by Victoria Grove

Stokey’s White Rabbit Cocktail Club is hosting Second Skin Theatre’s latest offering and has proven yet again, that you don’t need to go further than your local neighbourhood to see some great theatre. Down in the dark cave-like basement of the White Rabbit (also known as the “rabbit hole”), Director Jessica Ruano has brilliantly staged a one woman show with Sappho…. in 9 fragments. Sappho is a piece about the trials and tribulations of the ancient Greek love poet all interwoven with a very modern love story.

The piece attempts to break down the myths and legends which have surrounded the poet’s life for the last 2,000 years. It weaves together Sappho’s fragmented tale with a modern and also quite fragmented love story. Sappho (Victoria Grove) recounts all the highs and lows of her existence both while she was on earth and after her death. At the same time a heartbroken young actress Atthis tries to come to terms with discovering her sexuality and her infatuation with a successful older woman. Grove gives an utterly riveting performance in all of the roles.

The stage design was quite imaginative and fun which is sometimes rare to see in the fringe. The use of a scaffolding structure drapped in white sheets and swinging ropes designed by Ana Ines Jabares, was a clever choice. In my interview with Ruano for Hackney Hive she had this to say about the set design; “In the text, there is a great deal said about suspension, elevation, and the sublime, and we wanted to highlight this in the staging. Thematically, it relates to Sappho’s poetry being placed on a pedestal and out of reach.”

I wasn’t quite sure how this would all play out on stage but Grove was in complete control and moved fluidly from one rope to another even delivering lines upside down while wrapping her legs over the bars of what could almost resemble a cage. It’s something you have to see live to fully understand but completely brings the whole text to life. I actually left thinking how else would you stage a piece like that?

Grove’s task of embodying the poet Sappho, the giddy love struck American Atthis, her very sophisticated English lover and her lover’s daughter in a 70 minute show was no small feat. However, Grove manages to pull it off with great energy and spontaneity. She is captivating and possesses an incredible vocal range which helped her to slip in and out of the characters with great versatility. The text is rich with descriptions of Sappho’s and Atthis’ adventures which Grove manages to infuse with so much sensuality and vitality, that I felt transported to all the places she was describing from the island of Lesbos to Atthis’ freezing cold flat.

The space is a bit confining but it’s hard to say if that’s a flaw or what makes the experience all the more intimate. This show is full of heat and passion and is just the thing to warm you up during the January freeze. On till 27th January 2013.