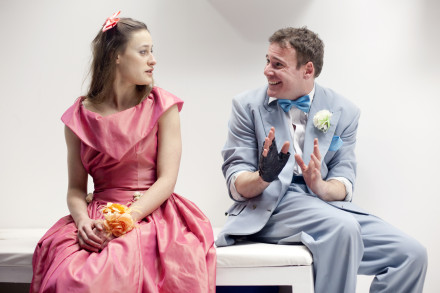 I remember there was a boy I really liked on the playground. I was around 6 or 7 years old and I used to chase after him till I got close enough to punch him in the stomach then I would run off like the wind. This game went on for years till the day I saw him give another girl his letter jacket. It hurt so much that I felt my heart tear into a million little pieces. “Gruesome Playground Injuries” by Rajiv Joseph has many of these bitter sweet childhood moments. The play manages to capture those raw feelings we have as we journey through our childhoods through the embarrassing phase of puberty and into adulthood. Joseph has written a remarkable play which talks about all the hardships of growing up without ever being banal, cliche’ or remaining on the surface of things. It will definitely be one of the top shows of 2013.

The play is the story of Kayleen (Mariah Gale) and Doug (Felix Scott) who met when they were 8 in the nurse’s office, a place where you could escape class for a bit, be the centre of attention and possibly have a life changing encounter. This is what happens between these two unusual kids in an unnamed American town. We find Doug in quite a state after trying to ride his bike off the roof and Kayleen is in for stomach problems which were provoked ,according to her mother , by her “bad thoughts”. We follow them from this chance meeting through 30 years of a truly roller coaster ride of a friendship.

The set design by Lily Arnold managed to evoke a feeling of a sterile nurse’s office with clinical ceiling tile lights above their heads and the perfect time traveling music. The set is full of shelves with various clothing items with their accompanying shoes. The actors have to go from elementary school to high school into adulthood so costume changes were absolutely essential. Director Justin Audibert let the actors do all of the set and costume changes on stage allowing us to experience all the wonderful in-between moments. During these moments, both actors moved so fluidly and the gentle glances they exchanged really proved how genuinely connected they are.

The performances are as raw and authentic as the writing. As you watch you can’t help but become engulfed in their stories. Scott’s Dougy is played with just the right mix of childish naiveness and dare devilish spirit that I couldn’t help but smile every time he said a line. Gale brought a natural rawness to her Kayleen that there were moments where I could feel myself tearing up. Both also maintained a consistent level throughout the entire 80 minutes and aged believably transforming themselves with each costume change in front of our eyes.

The performances each had just the right amount of vulnerability and humanity; it was a joy to watch unfold on stage. Scott’s comedic timing is spot on while Gale knows exactly how to play off his hyper-active energy. Audibert did an excellent job in helping to find this balance. His vision for the piece was so quirky and inventive that it felt like he brought an indie movie feel to the stage but without all the languid naval gazing. You would be silly to let this one pass you by.