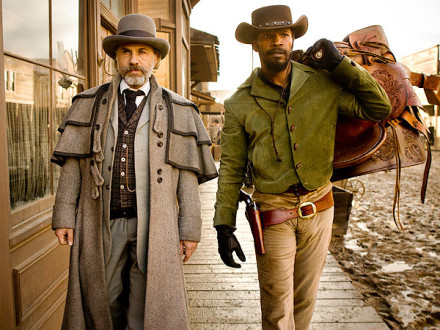 Jamie Foxx pulls off a slick performance, while Christopher Schultz up stages them all.

Arguable the coolest of directors, Quentin Tarantino, bring us another bloody offering in his self-proclaimed ‘southern’  Django Unchained. A tale of revenge and deceit for a slave turned bounty hunter, set upon the dusty plains of Southern U.S.A 1858.

We open with shots of the glorious Texan wilderness being unwillingly roamed by a chain gang of slaves, containing our protagonist Django (Jamie Foxx), and lead by their captures.  Day and Night the slaves are lead through this rough terrain with little more than a blanket to shield them from the harsh weather, this continues till a German bounty hunter by the name of  Dr. King Schultz (Christopher Waltz) – who takes the liberty of not just introducing himself, but his horse as well, while he halts their path.

We learn that Dr. Schultz intends to buy Django on the condition that Django helps him identify three outlaws that he is tracking down, and following a Tarantino style negotiation, the pair are on their way. After granting Django his freedom upon completion of the task, Schultz is intrigued to learn of his fortuitous connection with his new friend. Django’s wife Broomhilda (Kerri Washington) has a name of German origin, which excites the German Bounty Hunter, and he proposes that the two pair up for the winter and he will help Django locate and rescue Broomhilda from her oppressor Calvin Candie (Leonardo DiCaprio).

Quentin Tarantino’s new film adds his own spin on a classic cinema genre. He plays with the conventions of a traditional western but rather than focusing the story on the American myth of life on the rugged frontier – which is usually the domain of many westerns – the majority of the narrative unfolds on a menacingly elegant plantation.  Such is the difference Tarantino has been quoted as saying, that if any thing, Django Unchained should be dubbed  ‘Southern’.

That said, this film is still pastiche of the spaghetti western sub genre – so called for their production by European, mainly Italian directors – most noticeably Sergio Corbucci’s Django.  The initial idea I think may have been planted in Tarantino’s mind a few years ago when he acted in a Japanese homage film to spaghetti westerns – Sukiyaki Western Django

Jamie Foxx gives arguably his best performance yet, as the slick Django, Leonardo DiCapario provides a solid performance as the sinister Candie and Samuel L Jackson gives a scene stealing performance as Candie’s household assistant Stephen.  But it is Christoper Waltz who manages to up stage them all, playing a charismatic Dr. Schultz. Beautiful cinematography paired with Tarantino’s sleek dialogue and framed within a spaghetti western. We may not see Django Unchained win too many awards over the coming months due to competing with such films as Tom Hooper’s Les Miserables or Steven Spielberg’s Lincoln, But this film is not one to miss, as Tarantino continues to succeed in his pursuit to make cult cinema.