Theatre Review: The Master and Margarita 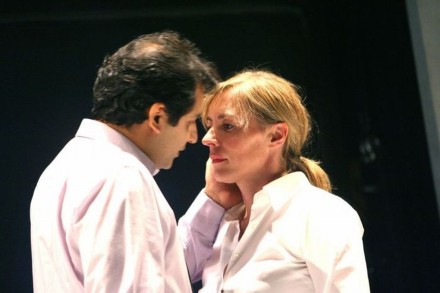 I should start by saying that Mr Bulgakov and I go pretty far back.

All the way back to 1997 when I was cast in at least seven different parts in a my university’s stage adaptation of Black Snow, a witheringly satirical novella that recounts the hate-hate relationship between the author and the eccentric master of method acting, Constantin Stansilavski. It was in that production that I discovered the Bulgakovian genius for searing, incisive, wit, the wonderfully arbitrary nature of his fictional world, which at times out-Kafkas   Kafka himself and at its devilish best, dives into the murky waters of magical realism dragging you down with it to explore and discover a deeply human truth.

And it is since then that I have obsessively hoarded every translated work I could lay my hands on, from The Fatal Eggs to The White Guard, Diabolique to A Country Doctor’s Notebook (on which Daniel Radcliffe’s latest Sky Arts vehicle A Doctor’s Notebook, is based), consuming as much of this literary thorn in Stalin’s side as I could.

And it was with great anticipation and great trepidation that I approached Simon McBurney’s adaptation of Bulgakov’s masterpiece. How could it be done? How could one play unite all the strands of this complex, magical, theologically challenging, side-splittingly funny and daringly subversive novel on one stage? How were they going to create a flight with Satan to the world beyond, parallel stories of an artist struggling to get published and an ancient Roman official trying to obtain forgiveness and a gloriously mischievous and delightfully malicious talking cat called Behemoth? Thankfully, McBurney’s work doesn’t need to unite all these things. What he gives you with the Compicite Theatre Company, is an endearingly deranged, mind-obliterating evening of theatre that preserves the book’s complexity, maintaining a frenetic momentum for nearly three and a half hours.

We start with a series of characters who, one by one, pace through the sparse setting repeating phrases like broken automatons, adding to a rapidly building sense of carefully choreographed chaos that becomes an eerie concatenation of voices set against the slate grey backdrop of Stalinist Moscow. From the mad cry of the protagonist amidst this mad mixture, we quickly find ourselves transported to the famous opening scene that begins with a theological debate in Patriarch’s Ponds and ends with a beheading predicted by Satan himself in the human form of the delectably sinister Professor Woland, played by Paul Rhys, lugubriously lumbering around on stage and darkly intoning his decrees and deliberations while incorporating elements of  Vincent Price and Michael Gambon’s Hamm from Endgame, peering out, searchingly , through dark glasses, come to Moscow to wreak general mayhem with his retinue of demons and murdering ministers.

Enthralled, we follow the twin narratives of the ill-fated Master – played with a perfectly unbalanced sense of humanity by Paul Rhys – as he tries to publish his novel with Pontius Pilate as its hero, thwarted at every turn by Stalinist censors, and the devil’s attempts to promote pandemonium while reuniting the Master with his estranged love and inspiration, Margarita – performed with an unrelentingly fiery energy tempered by   carefully concealed fragility by Susan Lynch.

What is most impressive about this production though is the way it embodies the original’s subversive spirit through an inspired synthesis of camera projections and cutting edge theatrical technology that manage to elevate the pathos of the passionate performances on stage as the backdrop becomes a kind of canvas on which other more surreal elements of the plot can take place, owing as much of its power to Finn Ross’ video work as to the actors riveting performances.

It is not a flawless adaptation. The aforementioned cat demon, Behemoth is a anthropomorphic, life-size puppet with great comic timing and filthy sense of humour that causes constant hilarity when on stage, but I have to admit, I longed for the book’s version of the demon, who spends a considerable amount of time in human form, the feature that I think most makes him like a sad clown, concealing the heavy burden of always willing evil and doing good.

Eschewed complexities aside though, this play is a magnificent multimedia spectacle of blood and mayhem that is both compellingly disturbing and morally challenging.