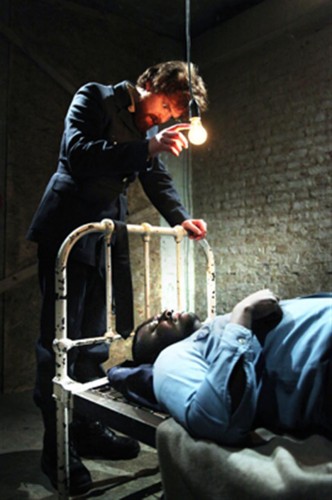 We all giggle at first as a regiment of six soldiers stand to attention in front of us in the foyer of the Shoreditch Town Hall. They are barking orders at us, one at a time.

‘Mobile devices are to be switched OFF!’

‘You will be divided into TWO groups!’

All rather entertaining and jolly good fun at first that we get, as an audience, to take part in this production of The Serpent’s Tooth, David Watson’s response to the recent King Lear at The Almeida.

We all exchange smiles, we whisper, we titter mirthfully. And then less so as we are lead down into the basement of the Town Hall, transformed into a bleak, bunker-like concrete prison reminiscent of Patrick Stewart’s 2010 Totalitarian Eastern Bloc version of Macbeth. Our nervous chortles die in the wind and the shadow of the twilight and our heart rates start to anxiously accelerate as we are lined up by the guards of this special holding facility and absorbed into an utterly enthralling narrative in the bowels of North Hackney.

Radically innovative, engaging, and challenging, Talawa Theatre’s production requires you to follow the fate of Edmund, the bastard son of the Duke of Gloucester, after the tragic events at the close of Lear – in which England is left a chaotic and lawless land with a power vacuum at the top – as he awaits judgement, unseen by the audience but greatly anticipated. Watson cleverly employs the prison guards as a kind of subversive chorus, presenting us with the prologue and introduction before we meet the unnervingly deranged prison warden (Alexander Campbell) and Abina (Babou Ceesay), the envoy sent from France to restore order to the nation and ensure Edmund receives a fair trial.

We continue to follow the story through holding cells and atop wooden crates as it becomes a concentrated nexus of power between the twin pillars of Abina and the warden, the guards meanwhile providing existential commentary and struggling to maintain balance and sanity under competing authority. Campbell is utterly gripping, finely balancing well-timed comic jollity and an unhinged ferocity in a dark, menacing mix that always seems to hang the threat of violence in the air around him. Ceesay is equally compelling in his quick descent from stern upholder of law and order to fierce and raging dictator full of insistent fury and conviction. When violence does come in, the bleak comedy that has preceded it only heightens revulsion and pathos. Fans of Lear get equal levels of visceral bloodshed and gruesomeness as well as other more subtle poetic references to the ‘primary text.’

Immersion in this production is complete, a testament to Signe Beckman’s masterful design, and a tribute to Tim Mascall’s and Steven Brown’s lighting and sound effects. Always and everywhere are you plunged in near darkness and conspiratorial whispers as the play drags you towards its fateful conclusion, the actors perfectly paced and working in flawless harmony to create a powerful hour of storytelling with political poignancy that will leave you feeling ripped to emotional shreds by the end.

Performances run until Saturday at 7 and 9pm.

This is a promenade performance with a running time of approximately 55 minutes with no interval.

The production is taking place at Shoreditch Town Hall.