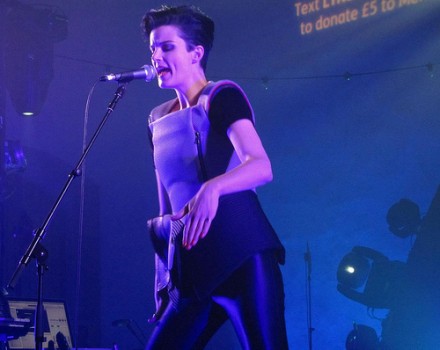 I am in a church, and a priest is standing a few meters away. The girls behind me are discussing, without irony, whether they prefer Carly Rae Jepsen or Taylor Swift. The speakers on the stage are playing country-style covers of contemporary hits. The church is misty and atmospheric, with the psalm numbers still up on the walls.

The setting is an unusual one for experimental electronica artist Karin Park, who cites Scott Walker and the Einstürzende Neubauten among her influences, and whose song ‘Out of the Cage’ includes the lyrics ‘we became each other’s terrorists, with silent weapons and with tightened fists’. Tonight, she is set to play tonight alongside mellow folk songstress Amy MacDonald. The other support act, Keane’s Tim Rice-Oxley, pulled out at the last minute and will be replaced by Newton Faulkner.

It is the last night of Little Noise Sessions at St John-at-Hackney, a week-long festival raising money for Mencap, a leading charity for people with learning disabilities. Earlier on in the week, the church held performances by a varied and high-profile line-up including Gary Barlow, Olly Murs, Noah and the Whale and Richard Hawley.

The crowd tonight is mixed: a fair number of families, a small scattering of trendy youngsters, and an assortment of Hackney-based fans of the Scottish chanteuse, happily sipping mulled wine and some reportedly lethal mojitos. Several of them look like they might have been there for the Sunday morning church service earlier in the day. The lights dim, and chirpy and charming Jo Whiley pops up to introduce the acts. The crowd love her, but will they share her enthusiasm for Karin Park’s industrial electro sound? 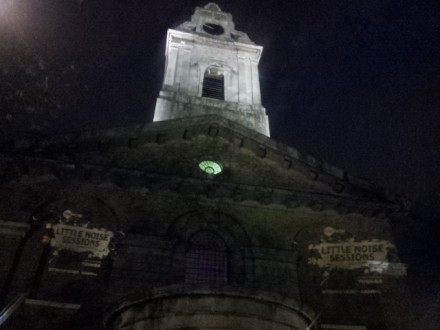 I need not have worried. The initial shock of Karin’s brother David hitting a cymbal at full force makes a fair few people around me jump, but it also ensures that they pay close attention. The heavy electronic beats fill the church, dispelling the crowd’s chattering. Everyone immediately becomes silent and remains so for the rest of the show — except for the enthusiastic cheering that greets the ending of each song. Karin and her brother show no sign of holding back the full strength of their sound or of toning down for the occasion. Their music straddles a fine line: it is at once dark, intense and full-on, but the songs are also melodic and catchy. Karin’s voice is so powerful that it holds the audience spellbound.

Karin is a part-time model, and at 6”3’ she certainly looks like one. Her dancing is sensual and robotic, and her long legs are shown off well by huge 80’s-style heels. She is dressed like a spaceman, with raven hair drawn back from her face and an spiky silver top. As her long-haired, multi-tasking brother pounds his drum kit and bass, she plays a keytar and bangs dramatically on a drum. One particular highlight is ‘Wildchild’: slow, haunting and Nico-esque, with cryptic and poetic lyrics (‘my past is like an apple tree… love is like a silver plate’). ‘Thousand Loaded Guns’ is danceable and fun, enticing the crowd to bob along, and ‘Fryngies’ is darkly passionate and experimental.

Her latest single ‘Restless’, recently championed by Nick Grimshaw, is like a mix of Gary Numan and Fever Ray. For the last two numbers the duo is joined on-stage by eight girls with string instruments, conducted by Karin’s friend and composer Robert Allen. The last song is the ballad ‘Bending Albert’s Law’, showing a softer and poignant side to Karin. All of the songs are set off majestically by the backdrop of the fairy-lit church, and the string octet adds warmth and a layered quality to the music.

Karin goes off stage, and the crowd is momentarily silent as they gather their thoughts. Next, dreadlocked singer songwriter Newton Faulkner charms the crowds with his guitar tricks, ending on a triumphant cover of Bohemian Rhapsody. Amy MacDonald comes on with her sweet manner and graceful song-writing, and the crowd can relax into a Sunday evening of soothing folk songs.

As the night comes to a close, I meet up with Karin Park to find out how she thinks it went.

KP: I genuinely think it was one of the most enjoyable concerts I’ve done in a long time. In the last few days I’ve had two, three hours of sleep. It’s been quite busy: we flew in from Montenegro at 4 this morning. It felt really good. The strings worked really well, and Allen is so talented: he did the arrangements for the songs. From a musician’s point of view we had a really good night playing music.

HH: How was it playing in a church?

KP: Well, I actually live in a church in Sweden, so it doesn’t feel so unusual to me. I grew up in a religious home so I’ve played in a church many times, but not so much with my own songs, and not like this. When I was a kid you normally had to stand still when you sang, and that’s what I hated about it, but now I can move around it and it’s nice. And it’s such a beautiful venue: they’ve done an amazing job decorating it.

HH: So would you say your upbringing was good training for what you do now?

KP: Absolutely. It made me sing all the time and I had to perform. We lived in a very musical household: David got his first drum-kit when he was three, and before that he played on pots and pans, so my parents thought, ‘we’ve got to do something about this’. And I sang before I’d even heard any recorded music.

HH: When did it start to diverge from church music into your current sound?

KP: When I heard Depeche Mode for the first time. No, I always knew that I wanted to be a singer, but when I started to write songs at fifteen or sixteen it turned into something completely different. I realised that I could make my own songs, and also my voice changed. It changed into something much more genuine, because when you sing your own songs you mean it in a whole different way, and that’s what music is all about: passion and singing about something you’re really passionate about. That’s when it turns into something else.

HH: Considering your religious upbringing, what do your parents make of your music?

KP: Well, my mum said that my last album makes her sick, but I think now she’s trying to listen to it a bit more. They’re very encouraging, but they don’t quite like that sort of music so much.

HH: I saw on Twitter that you’re reading The Golden Bough [A Study in Magic and Religion (1890) by Scottish anthropologist Sir James George Frazer]. Is that a topic you’re interested in?

KP: Yes, absolutely. I think, for me, I don’t really like religion, but I’m interested in the spiritual part and the symbolic part of it as well. Because even if you don’t necessarily believe in God, our society is built on religion, and I think it’s interesting from a more critical point of view. I kind of like to break religious rules a bit.

HH: You divide your time between London, Norway and Sweden: how difficult is it to adjust between them?

KP: Yes, it’s like a tiny village of 400 inhabitants and it’s completely different. But it’s perfect, because you can take all the impressions that you get in London to Djura [in Sweden] and you collect everything together. I quite enjoy the shock – I get very tired after a while in London, and I get a little bit bored when I’m too long in the other places, so a mix of it is perfect for me. I don’t have a proper place in London – I actually stay in the Swedish Seaman’s Church most of the time. It’s quite nice there; it’s a little bit quieter than living in the centre.

HH: Your new album, High Wire Poetry, is dark but also catchy. What were your influences as you were writing it?

KP: Well, I’m influenced both by more modern music and old 80’s electronic music. A lot of artists on Mute Records, like Fad Gadget and Depeche Mode and that sort of thing. So it’s a little bit of both, but at the end of the day it’s about songs, proper songs about something that I feel is real. And I think that’s what’s catchy about it. I also like to write pop music and I think throughout my career it’s going to come in lots of different packages, but it’s always going to be a song. I like those kind of old synthesisers and analog sound.

HH: Do you write all the music?

HH: You won a Spellemannprise [Norwegian Grammy] for Best Newcomer in 2003: how did that change your career?

KP: It didn’t really change my career much. That was on my first album, I was very popular in Norway at the time. I think it’s something that you can say in a press release but it doesn’t change your career so much. It changes things afterwards, when you can say that sort of thing. I was pretty angry at the time to be honest, about the whole industry, the whole money-making thing; I felt I was part of a money machine. I didn’t really appreciate it much at the time, but I do now.

HH: You’ve got a great look on the stage: who are your style icons?

KP: I don’t have a particular person, but I like designers like Gareth Cook, Rick Owens, Maria Piana: designers that make women look strong. And people don’t always like that, not all people want women to be strong, but I like that look.

HH: Is Mencap a charity you feel strongly about?

KP: As I said on stage, I find it a little bit strange that in our society there is such a drive to be normal, and it’s such a narrow path. Just imagine, if you sing in the street, people think you’re crazy. There are so many things that can make people think you’re a little bit odd, and I feel a little bit outside of that normality range, and I think from that point of view I can relate to people who have a difficult time fitting in, and therefore I think it’s important. And that’s not only children with learning difficulties, but also refugees and all sorts of people who don’t really fit in.

HH: You’re coming towards the end of your tour. Do you know what you’re going to do next?

KP: For the next ten days I’m going to write some new songs. I’ll have a little bit of free time in December, and then over Christmas we’re going to start touring again. I just want to mention that I’m really grateful for the support of Jo Whiley and it’s really great to be here and supporting her.