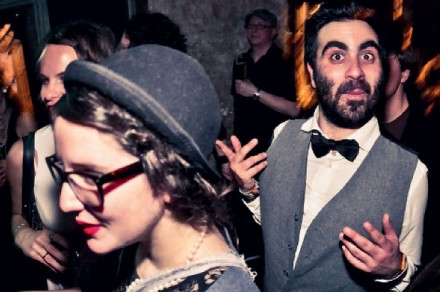 The 1920s are everywhere right now! From Woody Allen’s “Midnight in Paris” to underground speak easy parties across London, the prohibition era is having a re-birth.

Once a month the Bedroom Bar on Rivington Street offers an Electro Swing night, a musical genre which is a mix of 1920s and 30s tunes mashed up with electronic beats. The event is organised by White Minx and the night is “bang on trend”. Electro Swing nights are popping up all over London and if you like your swing remixed, then definitely go check one out.

White Minx had a live jump jive band , Radio Zastava , open up the evening. It was great to hear some live jazz without any remixing happening underneath. Just pure jazz featuring some recognisable be bop classics from Miles Davis and many others. The live band was followed by another performance by the Sicilian Swingrowers , entertainment by Swing Patrol and a late night shop cabaret.

The highlight for me was the Swingrowers. I think they have really found a perfect balance between the swinging numbers from the past and really fun toe taping rhythms. I also loved Loredana Grimaudo’s vocals over DJ  Roberto Costa’s vintage sounds. This group has been making the rounds in Electro Swing nights around the UK and Europe. They have just released their first album and are perfect for any dance party!

The Bedroom Bar is one of those great places in East London that offers a smorgasbord of events to attend. They’ve got comedy upstairs at their Comedy Café Theatre with free open mic nights every Wednesday and live music on almost every night of the week downstairs. The live music ranges from Jazz to Hungarian folk music. There are also film screenings and blues classes. Eclectic much?  Yeah I’d say so!
http://www.bedroom–bar.co.uk/
62 Rivington Street, London EC2A 3AY
020 7739 5706