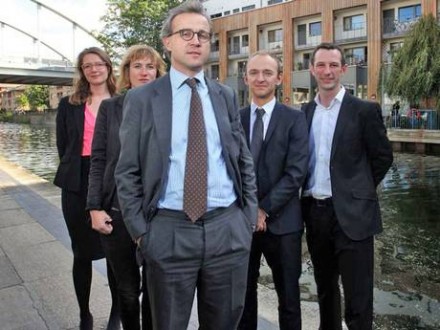 The leader of the pack Andreas Weseman and devoted team. Photo courtesy of The Independent

As the national debate surrounding education continues, Hackney New School held it’s second open day for prospective year 7 pupils, last Saturday. Not yet in confirmed premises, the Hackney New School laid its wares on the proverbial table for all to see, and not without causing some provocation. Opponents say it will cater to an elite clique, while ignoring those from less privileged back grounds and ethnic minorities. Some such as the NUT, believe it is wrong that state funding should be given to small groups of individuals, to run schools that are unaccountable to their local communities.

Hackney New School’s (HNS) open day was an inspiring event, with much speaking of change and a fresh approach to education. Focusing on music and a longer school day, the proposals offer an overhaul of the education timetable as we know it. Prospective pupils can look forward to a morning of structured teaching, followed by a varied study afternoon with a mixed programme aimed to enrich the students, through a variety of independent study and activities.

What was most evident during the meeting was that the enthusiasm, determination and stamina of those setting up free schools cannot be in question. The members of the steering committee showed an admirable desire to educate the children in Hackney, belying the accusations that the school is for  only for increasing local house prices suggested by some of  its opponents such as local blogger the Duchess of Hackney, who has since informed me, she may be coming round to the idea, especially “if they are inclusive when they open their doors”.

However the HNS has not finished the ride to open doors just yet. Interestingly, the steering committee admitted funding has already been cut since the Spring, when timetables were originally proposed. The direct result of this appeared as cuts to modern languages, with pupils studying just one language as matter of course.

Andreas Weseman,a former investment banker and founder of HNS, described his motivation to set up a free school as the desire to do something useful;  ‘A penance for not believing in God’ was the answer given on further persuasion.

Here is the root of the discussion about free schools- we are talking education, so we are also talking morality by definition. On an individual scale, parents will strive for the best education for their child. The free school approach is inherently divisive, offering new opportunities up but on a minimal scale. The school may be excellent for those attending, but appears to have no bearing on the community as a bigger picture.

HNS must defend its right to provide for the few by also defending the right not to provide for the many.  So can the HNS be taken as a small, independent project, or must we think of the school in the wider context of comprehensive schooling across the borough? The steering committee are determined that HNS should not operate as an isolated educator, but as part of ‘the national picture’, adhering to the curriculum and building relationships across schools and community groups.

However, this talk is currently hypothetical. It is hard to think there will be a time where state funded comprehensive schools and state funded free schools will exist in a symbiotic relationship.  Furthermore, how that relationship will behave has yet to be seen.

And this must be the crunch point. Free schools are demanding a change in mind-set towards state funded education, pushing us from collective thinking to individualism. Whilst schools offering the level of individual education proposed by the HNS are still in the formative stages, we must question what happens to the majority.

It’s come a long way since it’s “meet the team meetings at” their “Mums and dads” coffee mornings, at the Scolt Head Pub on Culford Road. The name of the headmistress and details of its premises will be confirmed this week. Hackney New School intends to open in September 2013.