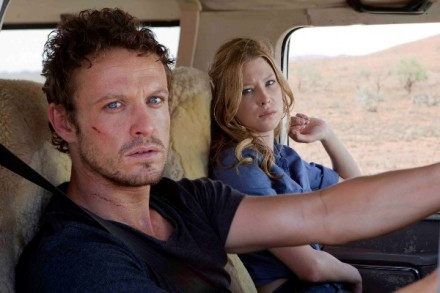 Australia took over The Hackney Picture House for three days last week. Formally known as London Australian Film Festival and held annually at the Barbican, this smorgasbord board of Australian celluloid now in a new incarnation, has partnered with Picture House. Melissa Palleschi popped over to see what all the fuss was about.

Hackney Picturehouse hosted The Australian Film Festival this weekend and I got the chance to check out a short and a feature from two up and coming Aussie directors.  I must admit to being an Australian film novice but saw everything from cannibalism to a resurrection!

My night started with a 13 minute short film entitled “A Tale of Obsession” by director Dave Wade. A pretty dark and twisted story of a girl, Ashley (Deana Ortuso/ Brittany Plummer) on a mission to lose weight and have the man of her dreams.  There’s the pretty best friend nicknamed “Ginger”( Alexandra Blue).  The boys call her that because she’s an “easy root to pull”.  There were plenty of zingers thrown in with humour, extremely well shot and the colours were luminous on screen. The ending is quite unexpectedly grotesque and gory but it was a delightful surprise.  I am very curious to see what else Dave Wade has to offer us.

Next up was the feature, “Swerve” by writer/director Craig Lahiff’ which made its UK premiere on Saturday night.  The film opened with an exchange of suitcases in the sun-kissed Southern Australian outback. The criminal running away with this suitcase is thrown to the side of the road by our femme fatale Jina (Emma Booth) meanwhile an ex Iraq war engineer, Colin (David Lyons) on his way to an interview, stops to help.  He finds the suitcase full of shiny green Australian dollars lying on the ground next to the fatal road accident.  This honest guy does the right thing and turns in the suitcase to the local cop. From that point on, all the characters in the story chase after it. The rest of the characters with their eyes on the prize are the psychotic cop, Frank, played very convincingly by Jason Clarke who turns out to be Jina’s husband, her boss, the seedy business owner Sam (Vince Colosimo) and a mysterious murderer Charlie (Travis McMahon).

Swerve is filled with random moments from marching bands which perform on any given day in a sleepy little ghost town, to a weird bartender who at the end gives a speech on the “Force of Destiny” by Verdi. The film also encompasses some Hollywood action film moments such as jumps off bridges onto trains and unbelievable falls into deep wells, which leaves one virtually unharmed.  It was definitely an adventure with twists and gory bits.  It is not without its problems, but I was entertained.

Check out these and other films at http://www.filmfestaustralia.org.uk