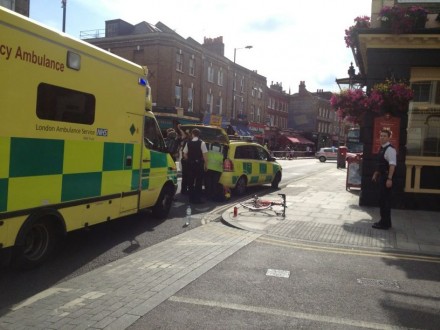 A cyclist riding through Stoke Newington Church Street, was  knocked off his bike  on the corner of Bouverie Road on Monday, at about 4pm.  The car driver was making a right turn into Bouverie Road, without indicating as the cyclist came from the opposite direction.

The driver then attempted to flee the scene but smashed into a parked motorbike outside The Defoe pub. The cyclist who is in his 30’s was treated at the scene before taken to a hospital. He has since been identified as David Hull by his brother Gareth, on Twitter. Yesterday David Hull took to Twitter and posted:

@markcavendish can I get a RT please mate. Got hit by a car cycling home and broke my jaw in 3 places. 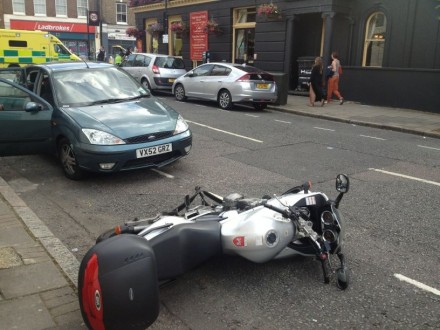 Toppled: The bike belongs to Landlord of The Defoe

According to Hull, he has had 3 metal plates inserted, to hold his broken jaw together.

Stoke Newington micro~bogger @northsxteen spoke to witnesses at the scene, who said the corner of Bouverie Road and Church Street, is notorious  for close shaves on a daily basis and others on Twitter agreed:

@northsixteen I live on Bouverie – that corner is a joke. Stand outside the Defoe and count how many near misses you see!

The driver was arrested for dangerous driving and driving without a drivers licence or insurance.