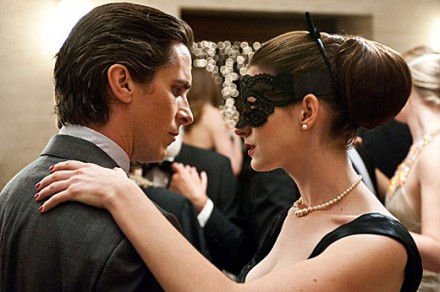 The eagerly anticipated concluding film in Christopher Nolan’s Batman trilogy is finally here. Four years after The Dark Knight left fans and critics alike speechless, Nolan brings us a catastrophic film with an apocalyptic feel, that a times seems all too feasible.

We open with an introduction to our hero’s main antagonist the haunting Bane.  Skip forward a few minutes and we are in the familiar surroundings of Gotham city. It’s been eight years since The Batman absconded from Gotham, taking the blame for the death of District Attorney Harvey Dent. Bruce Wayne has been in a self-imposed exile inside his mansion and the city has remained safe under the anti-crime model set by Dent

In Harvey’s honor a dinner at the Wayne manor is being held, this is where we meet our secondary antagonist. The sticky fingered Selina Kyle, masquerading as a maid, manages to get herself into Wayne’s private quarters and also into the story. Upon commissioner Gordon discovering Bane’s army deep in the sewers, Bruce dons the famous cape and cowl a final time to save the city that branded him as an enemy from the psychotic wrath of Bane and his minions.

The Dark Knight Rises stays true to its status as a Hollywood blockbuster with some amazing special effects and camerawork that only can be appreciated. Although this film is not without its problems, the first to address would be the issue many had at the test screenings before Christmas.

The breathing mask that Bane wears can at times impair you from hearing his dialogue, a problem they have evidently tried to address but makes him sound more like Darth Vader speaking through a megaphone. The second would be the re-imagined Bat-mobile, The Tumbler, which has been re-imagined once again as The Bat, and looks like it belongs in Michael Bay’s over-the-top world of The Transformers, and not in the dark and somber world in which Nolan has set this trilogy.

This film is full of familiar faces with the likes of Christian Bale (Bruce Wayne/Batman), Michael Caine (Alfred), Gary Oldman (Commissioner Gordon), Morgan Freeman (Fox) and some new faces to the trilogy such as Ann Hathaway (Selina), Joseph Gordon-Levitt (Blake), Tom Hardy (Bane) and a character who will remain nameless (telling you would be a huge spoiler). But, although having a big cast and being a massive film, The Dark Knight Rises is a disappointing end to Nolan’s operatic trilogy, maybe The Dark Knight set our expectations too high!

Edit – While a lot has been written of the horrid events in Aurora, Colorado, Hackney Hive would like to express sympathies to all those affected.   – Remi