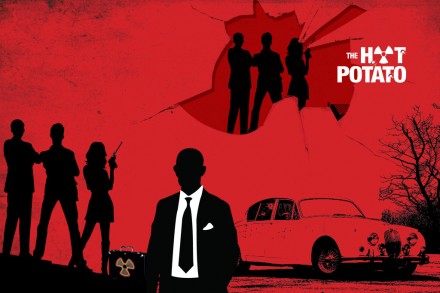 Since starting in 2000, the East End Film Festival has established its self as one of the UK’s Largest Film Festivals attracting an annual audience of over 30,000. Showcasing work from local and international filmmakers to London’s most dynamic quarter, the festival boasts an array of international premieres and industry master classes.

A hotly anticipated premiere at this year’s festival was Tim Lewiston Hot Potato. Set in the late 1960’s, the debut director brings us this period-comedy from the heart of London’s East End.  Based on true events, two fortuitous blue-collar geezers happen to come in to possession of a lump of pure uranium, after a suspicious explosion at a Ministry of Defence facility on the other side of London.

After discovering what the ‘Hot Potato’ really is and the realization of what they have been exposed too (and the consequences), Kenny and Danny go to local crime-bosses, The Twins, in the hope that they can help them sell the potato. This sets forward a whirlwind trip across Europe in search of potential buyers for our two chancers, accompanied by Danny’s trigger-happy girlfriend Carole and shadowed by The Twins Hench-man Harry Fisher.

As in many films where he plays the lead, Sexy Beast star Ray Winstone steals the movie as the apt Kenny, who’s mumbling of dialogue is a minor fault in his performance. Outlander star Jack Huston plays Kenny’s partner-in-crime Danny, and Winstone’s daughter Lois, plays the beautiful, slightly ditsy Carole.

According to Lewiston who also wrote this film, he was inspired by the films of his childhood such as The Italian Job, sadly this film fails to reach those dizzy heights and rather provides patches of momentary amusement. The Hot Potato starts strong with an intriguing premise but fizzles into repetition and predictability, which fails to entertain