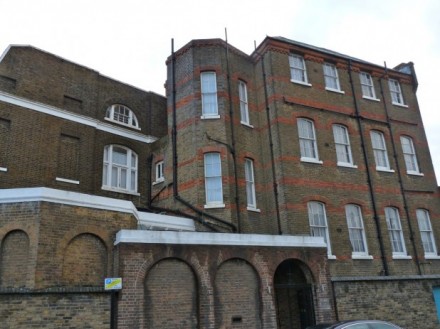 Protesting against some big corporations or big developments coming to our neighborhood, is nothing new in Hackney and is understandable, but there is something about a Homerton groups tactics, that reminds me of spiteful games children play in the school yard.  For them,  protesting the 25 room budget hotel Silk House also known as Sacred Lodge, has become a blood sport, which they relish with frighting hysterical fervor. What is more disturbing is that such small groups could wield such influence based on their collective hysteria, racial prejudices and smugness. The new owners are Asians which appears to have triggered them.

They call themselves  E9 Residents, and have been trying to shut down a hotel operating at 100-102 Hassett Road in Homerton, a building with an interesting history.

The former convent/orphanage and now grade II listed building, was built in the 1800’s.  Currently it is being used as a House of Multiple Occupancy (HMO) licensed by Hackney Council, but  has been advertising as a budget hotel,  charging as little £26 per night, even before planning permission was granted, which has infuriated some local residents who have formed a group to shut them down.

The owners of 100-102 Hassett Road are not without blame.  In January they were served with an Enforcement Notice by London Fire Brigade.   They have submitted, altered and withdrawn an absurd amount of planning applications since 2009, which have included an application to develop the building into a nursing home, hotel and multiple flats (including 5 bedroom apts) requiring a multistory extension. Understandingly unsettling for their immediate neighbours, who have become suspicious and worried of their intentions.

Although the latest application had the full support of the Council’s professional planning and conservation advisers, it was refused at a  Hackney Planning sub committee meeting on 14 May , where a handful of the residents and their friends opposing it, made their feelings known.  For full effect, they even brought along several children including toddlers. After the planning committee refused it, a member of E9 Residents was heard to say: “It’s the children wot did it”

The councils refusal has energized them and they (E9 Residents group), have since contacted all the web sites Silk House Hotel advertises on, which included online booking sites, in an effort to shut them down and promise to wage war and keep the pressure on.

After a string of comments from me and others,  E9 Residents group have taken to commenting about their plans through back channels and rarely on twitter or blog.  They now see themselves as champions and gate keepers for E9 and Homerton.  In fact the last meeting they had on Tuesday, was only open to a select few and was held at one of their members homes, instead of a public hall they had been offered in the neighbourhood. 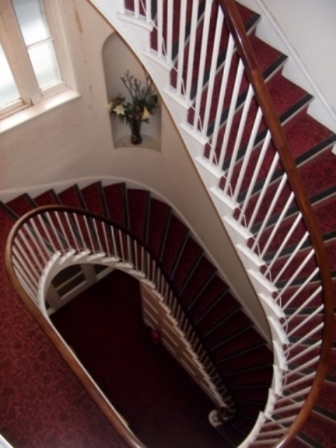 What sets this group apart from other neighborhood campaigns, are the guerrilla tactics they have embarked on and the way they took to Twitter, a blog and online petition to make their feelings known and to rally more troops. It wasn’t your garden variety neighbourhood action group, but more like sophomoric tag teams playing bullies.  According to one of the building owners, Naveed Mir,  some of the campaigners have got personal with their actions and have crossed the line.

He told me recently: “They have accosted guests and employees outside the building, posted stickers with blue tack on the door and exterior walls,  indicating they are not wanted in the area and even racially abused me.”

He explained how the abuse came about.  “After I realised there were objections to us being there, I knocked on Holly Knights door to discuss concerns she and others had, as she and her husband were quite vocal, but was surprised when I was met with hostility and a raging woman who told me my type wasn’t wanted here.  She even slammed the door in my face. They have not being open to dialogue with me” 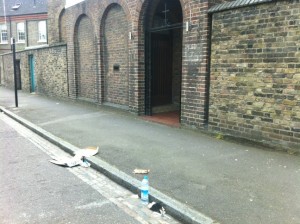 When I pointed out a photo depicting litter posted on twitter, by E9 resident group member Paul Herbert, hotel employee Omar told me: “It’s just another example of their harassment, it’s obvious the items were deliberately placed there.”

E9 Residents  group leader Sarah Miller declined to be interviewed but pressured me to sign the petition, despite me not living anywhere near Hassett Road or the ward. She also promised she would speak with me if I came to the planning hearing on May 15th.  “We need as many people there as possible to object”,  she said.

I have since followed their ferocious daily updates on Twitter, where they have openly admitted preferring squatters than the residents or hotel owners. Such is their ignorance and loathing, it’s prompted one person who signed the petition, to post: “My fears are they may preem[sic] young vunerable[sic] children into crime, whether it be drugs, sexual or other forms of crime”.

Paul Herbert made his young child comment on the petition site : “I can’t play in my street anymore with my friends because it is not safe. I miss playing out in my street a lot”.  Something tells me Herbert is not the type of father who would let his children play on the sidewalks on Hassett Road, even without the presence of the hotel, not when he has his own safe back yard.

So far E9 Residents group have failed to come up with any tangible reasons why a small hotel on Hassett Road  isn’t appropriate.  Unless you consider the following unsubstantiated claims as grounds to refuse planning permission:

People spitting on the street  – No evidence of it, although people spit all over Hackney.

Smoking in the rooms – one photo of woman with cigarette dangling out of window.

Fear of adults grooming children for sex work or drug deals – I might need a new crystal ball.

Parking  –  Hassett Road has no parking restrictions meaning parking is premium as people from all over, including Homerton station, park their cars.

The fact is  if it were a cutesy chic boutique hotel, they would all be besides themselves with glee while singing it’s praises and promoting it the way Sarah Miller bangs on 24/7 about the wonders of trendy Chatsworth Road Markets cake shops and it’s oh so trendy chic boutique hotel.

Again in Hackney, another example of  as long as it is aesthetically pleasing to a group, it’s welcome in their neighbourhood.

Naveed Mir is appealing the refusal, which will be be determined by the impartial Planning Inspectorate.

7 Responses to "Nimbyism gone wild in Homerton or hate group"