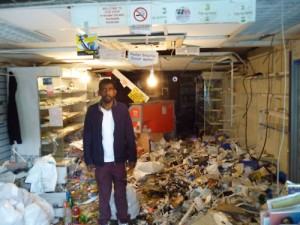 The morning after; Siva surveys his damaged shop

In the 18 months Mark Pytilk lived in Clapton Square, he shopped at Sivaharan Kandiah’s convenience store  in Clarence Road, Clapton, just about every other day, where he was always greeted with a warm smile and small talk.  But it took watching footage of Mondays riots to realise he didn’t know his name.

Known as Siva to residents, the business he owned and ran for 11 years was looted by thugs who took everything. What they didn’t take, they destroyed, leaving him with 25 pence in his cash register.  He and his family watched the destruction of his business from his home in Walthamstow unable to do anything.

The next day, viewing the destruction of 11 years of hard graft and well over £60,000 worth stock lost,  Siva was comforted by locals with kind words, hugs and tea. While he is covered by building insurance, he had no content insurance and no means of recovering his loss of stock. 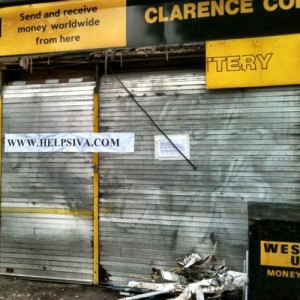 Pytilk followed the riots from New York via the Internet including Twitter where several of his friends in Hackney kept him updated on what was going on in his old neighborhood. He told Hackney Hive:  “He [Siva] was the first person I thought of when I heard  about the mounting tensions on Clarence Road; he was always an incredibly smiley guy and I was devastated to hear what happened to him.

“The desire to help came from feeling so powerless to do anything from so far away. Both my girlfriend and I still feel like residents of Clapton, and this felt like something tangible we could do”.

The former music journalist, a 33 year old Canadian and his partner Jess Greenwood, now based in New York City, lived in Dalston and Clapton for 5 years before relocating across the Atlantic two months ago. Inspired partly by sites set up to help two other victims of the riots in other parts of London, Pytilk set up Help Siva yesterday and within 24 hours had raised over £11,000.

When asked if there was a target, Pytilk replied: “All donations are now being run through Hackney CVS, so it’s more difficult to track. There isn’t a goal. I would hope that if this donation service keeps rolling, perhaps we could use any extras to fund the looting that happened up and down various shops on Clarence Road, but ultimately I’ll leave those kinds of decisions up to Siva and the Council. 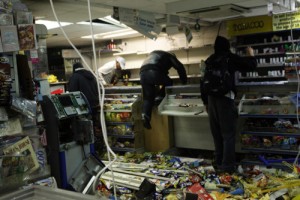 And what does he think of of the people who caused so much pointless destruction to his old neighbourhood:  “I think it’s an incredibly complicated situation and I don’t think there’s a simple answer. I don’t condone the riots or the violent and destructive acts of the people who participated in them, but I do believe they speak to how left behind and how outside of society a lot of people feel”.

Siva’s response:   “I believe in Hackney. I believe in this community. I am filled with hope”.