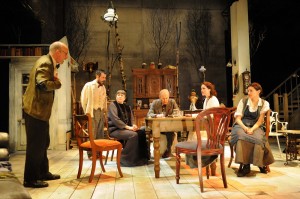 Last Thursday I went along for my second visit to the recently relocated Arcola Theatre for a performance of Anton Chekhov’s Uncle Vanya. My first trip there had been to Studio 2, a space not altogether dissimilar to the theatre’s old spaces on Arcola St, for an evening of short, dramatic sketches.

Nothing, however, could have prepared me for what lay behind the modest white door of Studio 1 and I now fully understand the theatre’s desire to take this space on.

Opened several minutes before the play was due to begin, it is a cavernous, subterranean cuboid, arranged for this production with a central stage bordered by seating on three sides. The space was arranged in a way that created four entrance/exit points for the actors, two of them from beneath the seating itself, which would allow voices and sounds of movement to announce the arrival of characters or to prolong their exit from the visible stage.

This arrangement was used to the full by the excellent Belgrade Theatre Coventry actors, partners of this co-production with the Arcola. For those unfamiliar with Chekhov, I should probably add a few markers here. His works are text rich and, although often sprinkled with humour, they can be bleak. Uncle Vanya is no exception: the overarching theme of this play is simply despair. The waste of a life. How things “might have been”. Effectively: I could have been a contender.

However, his works are also fantastically written and complex, all reasons that demand that any attempt to perform Chekhov has to be ambitious. And this one most certainly was.

The play sees the arrival of Professor Serebryakov (Geoffrey Whitehead) and his young wife Yelena (Marianne Oldham) from the city to the country estate managed by his brother-in-law, Vanya (Jon Strickland), disrupting the orderly life they have managed to build there. Vanya and Doctor Astrov (Simon Gregor), the local doctor, both fall in love with the professor’s young wife. Sonya (Hara Yannas), the professor’s daughter from his deceased first wife (Vanya’s sister) is a voice of reason and an industrious character who, together with Vanya, has worked to hold the estate together for the family. Yet she, as does Yelena, falls for the enigma that is Doctor Astrov.

The play moves towards both a botched suicide attempt and a murder attempt on Serebryakov, both by Vanya, that precipitates the professor’s departure back to the city and away from the ‘madhouse’ of the estate that closes the play. The final scene is one of a return to the everyday humdrum of the management of the estate with Vanya and Sonya filling out the accounts, tears running down Vanya’s face and Sonya promising that “We shall rest”. With the departure of the professor and his young wife also departed all hope, all distraction, all promise of a ‘something else’. It is truly desperate but at the same time also a beautifully poetic exposure of the human condition.

The play is littered with emotional tensions between all of the major characters and it seems almost unfair to highlight any single performance – the entire cast of this production were simply brilliant. However, highlighting one of the central tensions of the play between Doctor Astrov and Yelena Serebryakov, these performances were outstanding. Marianne Oldham fitted the part of the professor’s beautiful young wife perfectly and was exceptional in conveying an emotional ambivalence to the attention she was receiving from her suitors, albeit falling for the mystique of Astrov. She also magnificently carried off the torpor she felt at the estate life and how it had drained the souls of those living in it. Simon Gregor was equally marvellous in his portrayal of Astrov – in both the moments he was expounding the complexity of the doctor’s world view and philosophical ideals as well as the gusto with which he carried off the blind-drunk Astrov, cavorting around the kitchen and pontificating hilariously. I would also like to tip my hat to a very accomplished performance of Sonya – Hara Yannas really got into the mindset of perhaps, in an unacknowledged way, the most emotionally complicated character of the play.

The set for this piece was intelligently arranged and made maximum use of the space – comprising elements of a drawing room and a dining room, it allowed action to flow effortlessly between the two. Upstage were the two further stage exits, one behind the garden – complete with trees – and the second acting as a portal into the bowels of the vast old estate house. There were just a couple of minor anomalies of the set that caught my attention – a red-light outline map of Africa and the same red-light tracing of a tree on the back wall of the stage. There was also some of the same red-light around a religious icon on the wall – all of which seemed to jar with the naturalness of the remainder of the set. I’m sure there was a unifying idea here, but I couldn’t quite get what it might be.

The production was further enhanced by great lighting and a rich tapestry of sound effects, including music composed for the piece by Boleslaw Rawski. The orange glow over the opening scene of the play with the background sound of flies set the tone by really emphasizing the searing heat of the Russian summer, something that would add to the maddening atmosphere growing in the house. And there were some effective sound effects during a storm as well as the periodic background sound of birds. It was notable just how good the quality of the sound was in the space, the speakers must have been distributed in a way to completely envelop the audience. It really drew you into the heat and stifling atmosphere of the estate.

With this all-round excellent production the Arcola have embarked on a new era in their new home. The audience responded to the play (a second, deserved applause call for the cast) in a way that I am continuing to respond to what this theatre does – with a profound admiration. The Arcola was one of the few theatres to receive a budget increase as part of the arts cuts recently. These cuts were a savage affair, but it is clear to see why the Arcola got this uplift. They work extensively with the community, they aim to be a carbon-neutral venue and they produce brilliant theatre.

Hackney is truly spoiled to have such a gem at its heart, one that is shining brighter with every production they do. I wholeheartedly recommend going to see this play to see how good the new space is and how good what they are doing in it is. It runs until June 4th and is reasonably priced, with ‘Pay what you can Tuesdays’.

I certainly knew, as I left the theatre that evening, that I’d be back again myself before the end of the run.