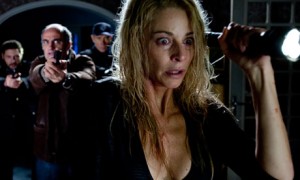 ‘Julia’s Eyes’ arrives with the promise of great things. Chief among these is the presence of Guillermo Del Toro as producer. The last time he put his name to a Spanish horror/thriller, it was to the brilliant ‘The Orphanage’ in 2007. The Mexican writer and director has one of the finest creative minds in the film business (see ‘Pan’s Labyrinth’, for example) so if anyone is likely to spot a winner then surely it is him. In truth, ‘Julia’s Eyes’ is an uneven game of two-halves which takes a while to hit its stride. The film begins as a credibility stretching mystery until, part way through; it embarks on a terrific change of tack which takes it to another level.

Julia, played by Belén Rueda who was also in ‘The Orphanage’, has a terrible curse. She is afflicted with a degenerative eye disease which, if left untreated, will cause her to go blind.  Her twin sister Sara (Rueda again) has the same problem but she does not stick around too long, committing suicide within the first ten minutes of the film. Julia does not believe the official police account of events and suspects foul play.

We know she’s right as we have witnessed the bizarre circumstances of poor Sara’s demise. Julia undertakes her own investigation into her sibling’s death, ignoring the protestations of both the police and her extremely patient partner, Isaac (Lluís Homar).

By tracing Sara’s final days, Julia discovers that she had acquired a boyfriend who may well hold the key to her fate.  Julia tricks Isaac into visiting the hotel where Sara and her lover had stayed not long before the end. As luck would have it, several people not only remember Sara but are able to give Julia additional clues to help her along the way. Julia also becomes convinced that she is being watched and develops a dangerous habit of following strangers, possibly killers, down dark corridors all on her own.

Julia does this a few times in the first section of the film so you have to buy into her patent disregard for her own safety if you are to carry on watching. She seems smart enough, so one imagines that she might apply more common sense to her actions rather than running around like a kamikaze Nancy Drew.

Perhaps grief has addled her brain. In one surreal scene, Julia silently enters a locker room full of half-naked blind women.  They may not be able to see Julia but it does not take them long to sniff her out. Julia’s snooping has some pretty catastrophic results but the police still refuse to believe that there is anything all that suspicious going on.

So far, ‘Julia’s Eyes’ is a standard murder mystery, with some off-the-wall touches, where the police sit back whilst a member of the public carries out all that dangerous investigatory work on their behalf.  The story then mutates into something else entirely when Julia has to undergo an operation in an attempt to save her sight.

Her recovery requires her to wear a bandage around her eyes at all times or risk losing her sight forever. Julia is effectively blind for the rest of the film and, quite unwisely, moves into her sister’s old house. The twist is that the director Guillem Morales wants us to share in Julia’s disorientation, playing with darkness and shadow to obscure faces and other details (good cinematography from Óscar Faura.) Morales turns up the volume in order to mess with our sensory interpretations of what is actually happening. We become almost as lost and confused as the housebound Julia, the difference being that she is in terrible danger.

The film becomes a woman alone in ‘a creepy house’ thriller where you are not sure who can be trusted. The visiting help seems friendly enough, as does the old lady next door. The other neighbour is a sex pest and his daughter is plain weird.

Did any of them have a hand in Sara’s death? The tension escalates as Julia stumbles around and experiences terrible nightmares until she cannot be sure what is actually real anymore.  There are several shocks in store, one in particular is well signposted and yet still knocks you back with its intensity. It is this portion of ‘Julia’s Eyes’ which raises it above the average chiller.

‘Julia’s Eyes’ may not be as good as ‘The Orphanage’ but it does share that film’s sense of abiding tragedy and resultant emotional power.  Julia and Sara suffer through no real fault of their own at the ruthless hands of others. What ‘Julia’s Eyes’ has, that other films in the genre do not always possess, is the notion that the lives being lost actually had value and meaning.  Julia’s investigations are conducted at great personal cost and the film ends on A poignant image which might bring a tear or two to your own eyes.