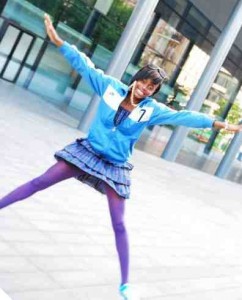 Leon Dunkley 22, of Kenninghall Road, E5 and Mohammed Smoured, 21  of Hopwood Walk, E8 were both found guilty at the Old Bailey of her murder and possessing a firearm with intent to endanger life. They will be sentenced at 2pm today (12.04.11).

A third person, Dwayne McIntosh Wisdom 17,  of Graham Road E8 was found guilty of assisting an offender, possession of a firearm with intent to endanger life and possession of an imitation firearm. He will be sentenced at later date to be confirmed.

A 16-year-old male youth (who can not be named) from Hackney was found guilty one count of possession of a prohibited firearm.

Agnes was shot in the neck last April 14th, at appox 7:30pm as she stood in line at a Hoxton takeaway, waiting to buy pizza and died two days later.  She was a promising student at Haggerston School. She wa not the intended target.

An associate of Dunkley and Smoured saw both men cycle onto the Morland Estate (London Fields) at about 7:30pm – 15 minutes after the shooting – wearing clothes matching the description of those worn by the suspects. Dunkley then sold his jacket to an associate.

Dunkley was arrested on 17 April 2010 and charged two days later. The black jacket he wore during the incident was recovered and tested and found to have a high level of gunshot residue on it.

Smoured was also arrested four days later. He was positively identified as having been with Dunkley when he fired the shot and charged on 23 April 2010.

On 21 April 2010 patrolling officers spotted Wisdom in the London Fields area. He was carrying a rucksack and made off, throwing the bag into a garden in Blanchard Way, Hackney. It was recovered and found to contain a sub-machine gun – the weapon used to kill Agnes – a pistol and a quantity of ammunition and shotgun cartridges. 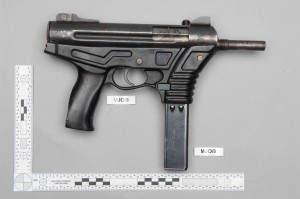 He was arrested the following day at his home address, where he was found hiding in a wardrobe under a pile of clothing, on suspicion of possessing a firearm. He was subsequently charged.

Enquiries led police to discover guns used by the London Fields gang were being stored at the home of, a 16-year-old male youth (then 15). He was arrested and later charged on 20 September 2010. 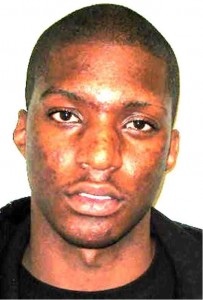 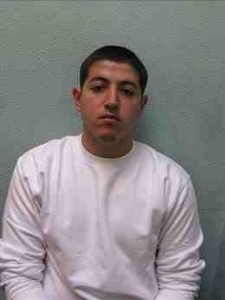 Both Dunkley  (the gunman) and Smoured ( lookout person), were members of the London Fields Boys gang, who have an ongoing feud with the Hoxton Boys gang.

The jury heard, the pair joked to friends when describing the moment Agnes fell.  Smoured laughed: ‘It was funny the way she dropped.’

‘One of them calmly took out a gun, pointed it towards the window where Agnes and her friends were and fired. It was very quick. He didn’t even stop his bicycle. He didn’t pause to see who was in the shop or to aim at anyone in particular. ‘The bullet hit Agnes in the neck and she collapsed immediately.’
He added:  “It was as callous and cold-blooded as it could be, carried out in broad daylight in a busy street in Hoxton.

‘Agnes Sina-Inakoju appears to have been the innocent victim of an ongoing rivalry between gangs in that part of London.

‘The gun that was used to kill her was one of a number of guns that lay in the hands of a gang that were rivals of a gang in Hoxton”. 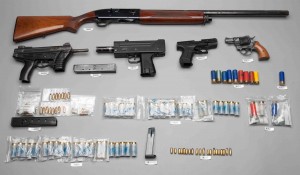 Other weapons and amo siezed by Hackney Police

Her family released a statement today:

“Agnes Sina-Inakoju was a very beautiful, friendly, brilliant and intelligent young girl with lots of potential.

“She was full of ambition and intended to go to Oxford University to continue her study after school.

“Back in March 2009 Agnes represented her school, Haggerston School, in the Hackney regional finals of ‘John Petchey’s Speak Out Challenge’, where she won second place for her presentation about racism that she presented in front of lots of people at the Hackney Empire.

“Agnes had plenty of time for her friends and family. She enjoyed being with her friends. She was a very popular girl and fun to be with. She was lively and always had a smile.

“Agnes’ family have lost a sister, friend and daughter. We still can’t believe that she has been taken away from us at such a young age. We are still coming to terms with her loss and the fact that we will never see her again. She remains in our hearts, where she will remain forever. We will always remember the beautiful times that we shared together as a family”.