Screening and discussion – In the Land of the Free 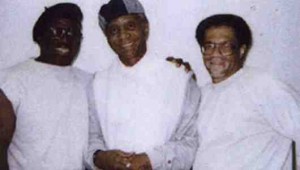 Herman Wallace, Robert King and Albert Woodfox in 2008, during a rare break from solitary

Angola 3 Herman Wallace, Albert Woodfox and  Robert King, have
spent almost a century between them in solitary confinement in  Angola,
the Louisiana State  Penitentiary.

Herman and Albert are still held in solitary confinement today  after thirty eight years.  How could this be? In America…In Obama’s America? The film will be followed by a discussion with the  Director Vadim Jean and Robert King, the only freed member of the Angola 3 who spent 30 years in Angola Penitentiary for his political activism as a member of the black panther party.

Robert King was sentenced to 35 years imprisonment for a crime he did not
commit in 1970.  In 2001 the state finally acknowledged his innocence and
set him free.  From the moment of his release, Robert has been working to
spread the word about the innocence of his two comrades.

The film is narrated by Samuel L Jackson and features Robert King, telephone interviews with Woodfox and Wallace, and interviews with attorneys and others involved with the cases – including the widow of Brent Miller, who believes the men are innocent of her husband’s murder.

He is coming to the UK to continue this work. Robert’s own stunning account of his story ‘From the Bottom of the Heap‘ will also be available on the night.  He
will be signing copies of the book @ £15.00

Learn more about the Angola3