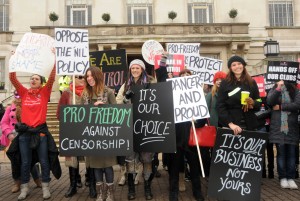 “Earlier draconian proposals included that all ‘sex’ establishments to be located below ground level with entrances “away from main thoroughfare”, meaning anywhere but the high street it’s located on.  An alley maybe?”

However the existing businesses in the borough, which consist of four lap dancing clubs: Rainbow Sports Bar, Browns, The White Horse, Ye Old Axe clubs and the lone sex shop –  Expectations, all located in Haggerston Ward, will be allowed to continue providing they adhere to certain conditions, referred to in an amended proposal.

All but two councillors at last nights meeting voted for the amended version. Cllrs Angus Mulready-Jones and Cllrs Geoff Taylor have consistently opposed the proposal.

Pauline Bristow part owner and Licensee of the White Horse in Shoreditch High street has owned her business for 32 years responded by saying:

“I’m disappointed about Hackneys decision but it was expected”, she told Hackney Hive. “Until I read the final documentation, there isn’t much I can say.

“There has been so many changes to what is already a strange and baffling worded document”.

Bristow’s establishment falls under what Hackney council consider ‘longstanding and well run’, so for now The White Horse will remain and along with all the others, it’s license will come up for renewal once a year. Asked if she and others would consider challenging Hackney councils ruling, she said “That is a possibility, again it all depends on how the policy reads, I yet have to see it”.

Other draconian proposals included that all ‘sex’ establishments to be located below ground level with entrances “away from main thoroughfare”, meaning anywhere but the high street it’s located on.  An alley maybe?

Another unrealistic condition was that dancers would only be allowed to touch the punters on their hand, which meant should a dancer recognise a favorite patron of the club and decided to say hello with an embrace, it could very well go against the establishment when it comes up for renewal.

While Hackney council have come down heavily on certain adult establishments, others such as saunas and massage parlours have been left untouched and that is because the grey area of massage and saunas fall under Massage & Special Treatment (MST), which also covers beauty salons that offer manicures and waxing. A recent phone call to a Chatsworth Road Sauna made it clear to me, that their massage services were only available to men.

Ultimately it’s obvious that Hackney’s adult establishments will continue to stay in business at the mercy of the council, sanctimonious groups and residents who feel uncomfortable about commercial adult pleasures.

One Response to "Puritanical borough of Hackney bans ‘sex’ establishments"