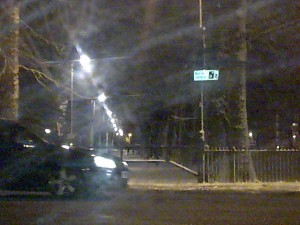 At around 10:30 pm Tuesday 11 January, a man was arrested on the corner of Leabridge Road and Hillstowe Street in Clapton.

However the police version is differing from what witnesses are saying.  Police say the 23 year old  black man was arrested by plain clothes police officers, who were conducting a “robbery patrol” of the area.

The officers approached the suspect and identified themselves as police officers, after claiming they saw him urinating against a car in view of the public. On approaching him, police smelled cannabis and decided to search him, but according to them he got hostile and tried to push and walk past them, while shouting and swearing, which they claim “caused clear harassment, alarm and distress to members of the public”.

They further claim he assaulted three officers who were trying to handcuff him.  He was arrested for urinating in public, obstruction of a drugs search, section 5 public order and for three offences of assault on police. Later,  a search of him at Stoke Newington Police Station, found twenty wraps of class A drugs in his pocket and he was again arrested on suspicion of possessing class A drugs with intent to supply.

Shortly after the arrest last night, Hackney Hive received the following email from a concerned resident who had read our reports of the robberies  in Millfields Park. It appears they were quite “alarmed and distressed” at what they saw :

There has been an incident on the corner of Hillstowe St and Leabridge Road this evening – around 10.45pm.

I didn’t witness it but arrived just as the police were leaving. There was a crowd of about 20 people gathered (all it seemed local residents who’d seen what had gone on or heard the commotion and caught parts of it) all of whom were united that the police had acted in a violent and un-defendable manner. This is what the ones (3-4 people) I spoke to said had happened.

A young black guy was stopped by 3 plain clothed police (with radios in their back pockets) started to remonstrate with him. Two of them proceeded to pin him against a wall, holding him by his hair whilst 2 others started punching in the face. They moved him to a near by parked car and continued to hit and punch him as he screamed. He did not put up an resistance. They handcuffed him.

Marked police cars arrived. Residents (mainly but not exclusively black) who had spilled on to the street had argued with the police about their excessive force. When the police realised the strength of people’s anger about what had taken place – they quickly moved to leave the area.

The local residents said they were going to report what they described as “brutality” to the police immediately. I’m fairly new to the area but they said they’d report to Stoke Newington police (i wasn’t sure that was our nearest station).

The fact the police officers were in plain clothes suggests there is probably more to the background to this than is apparent but it still doesn’t excuse what local residents saw  – excessive violent force.

Any chance you could look into? I didn’t witness any of this and all of the above is second hand. But people there said they’d report their complaints to the police about how this young man been attacked by the police.

Hackney Hive Spoke to the person who sent the email today and can confirm what was relayed by that the witnesses, and points out the suspect was seen urinating on a wall by some of the people gathered and not on a car. The author of the email has also reiterated how outraged the witnesses were.

At 2:30pm today, the suspect was still in custody and had not been charged.

Hackney Hive will endeavour to speak to one of the actual witnesses later today.