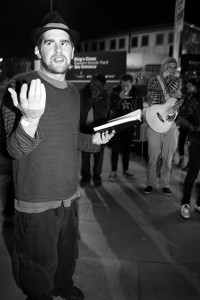 Captain of the Rant (AKA Paul Case)

It’s a cold Friday night on Clarence Road, and while most people are drowning the week’s sorrows in their local watering hole, a large crowd of people have congregated at the celebrated vegan café and social centre, the Pogo, for a night of spoken word and poetry, entitled ‘The Spoken Sedition’.

Run by Stoke Newington based poet, Captain of the Rant (AKA Paul Case), tonight’s  line-up features the queer-feminist stylings of both Catherine Brogan and Sophia Blackwell, as well as the London Area-Coordinator of famous Slam events,  Hammer and Tongue’s  Sam Berkson (AKA Angry Sam), and the wonderful unclassifiable work of Dave Pepper.

The night is a resounding success, drawing a crowd of people you may not traditionally associate with ‘poetry readings’; this is a far cry from the stuffy image that those words create. The spoken word/poetry scene in the UK is thriving right now, and is far removed from the uninviting, overly serious world of recitals. Tonight’s event has the feel of a gig, relatively informal and a lot of fun. There is also a definite socio-political element to all of the night’s acts, that mark these poets apart from those merely chasing an ideal aesthetic of literary beauty. It’s exciting and inspiring in the way all good art and music should be.

Captain of the Rant explains how he got involved with the spoken word scene through the world of punk rock and stand up comedy, co-running a night called Out of Step:

“I used to host it with my stand-up comedy. We put on a huge range of stuff to demonstrate that ‘punk’ can be used as an umbrella term for a massive variety of artistic expression, so we included a number of comedians as well as poets. We put on Rik The Poet-Tree Man and Dave Pepper, who are two absolutely fantastic and incredibly underrated performance poets, and they were a revelation to me. I had very little experience with seeing spoken word before I saw them, and they expanded my horizons in terms of what you can do with that form of expression. I had a number of ill-informed prejudices about performance poetry at the time, and they showed me you can make it thoughtful, fun, crazy, touching and experimental all at the same time, and it was an absolute revelation.”

This led to his leap into the world of poetry: “I wrote a (fairly terrible) poem and read it out (fairly terribly) at one of the One of Step nights. I really enjoyed doing it so I just carried on writing, performing, getting gigs.”

This is a crucial distinction to make between the poetry seen tonight at the Pogo café and the kind of poetry that has a pretentious reputation; all of the performers here tonight, and most of the crowd, are politically engaged in some way and are coming to the scene via other underground networks, be it through punk rock, the vegan/squat scene or the radical feminism associated with wonderful events like the Lady Fest (often all of these things!) It is telling that even the performers say that they had misconceptions about the form before becoming exposed to it in this fashion, which is why it is so important that nights such as this are springing up, taking a new form of poetry out of the established venues and circuit to a new crowd.

The Out of Step nights began at the end of 2007, held regularly in the basement of Ryans Bar, Stoke Newington. As well as an eclectic mix of folk, punk, ska and hip-hop, a number of spoken word artists started to make their presence felt. Kate Tempest, now becoming increasingly well known with her band Sound of Rum, made an appearance, as well as interesting acts such as The Ruby Kid (great political hip-hop that is also performed a cappella), the aforementioned Dave Pepper, in addition to the nights being hosted by Captain of the Rant.

This branched out to a number of purely spoken word nights being held in the excellent independent bookstore, Pages of Hackney, which were a great success, proving that there was a definite growing interest in these kinds of events (the gigs also continued, in various venues and squats across Hackney). It’s a perfect example of various alternative scenes cross-pollinating and influencing each other, which is why an alternative venue such as the Pogo is entirely appropriate for such an event. Captain of the Rant explains how he came to run a night there:

“The person I now run ‘The Spoken Sedition’ with, Hannah, called me up one day and, knowing I did spoken word and had links within the scene, asked if I could help run a poetry night there. It’s a great, intimate space for such things, purely acoustic and with an attentive audience. The nights are free/donation and the proceeds go to a group that me, Hannah and the Pogo Cafe can agree on.”

I ask him how poetry goes down with the punks and the activists:

“… I’m very interested in cross-pollinating arts and scenes and in my opinion the punk/activist scene in London has very little poetry going on. There’s some, but not enough! It’s important to me, being interested in both, to introduce the two scenes to each other – bringing punk to the poetry scene and visa versa.

Therefore, ‘The Spoken Sedition’ is bringing likeminded people together who may not know of each other’s existence, for the benefit of both parties. We want to concentrate on promoting expressive performers who have interesting, non-mainstream politics. Also, I think it’s necessary to get a wide range of performers from different backgrounds and opinions in the mix, to challenge the audience and make them think whilst also having a great time. It’s necessary to me that it’s not just another po-faced poetry night, I want it to be rowdy and fun, but also creative and intelligent. Politeness and reverence are the death of poetry! We put on our first event on 22nd October, and it went fantastically well. We had Catherine Brogan, Kess Tamblyn, Sophia Blackwell, Angry Sam and Dave Pepper and they all stormed it, talking about different issues but all coming from essentially the same place. It worked perfectly.”

Knowing that he has lived in Hackney for many years now, I ask whether he feels that Hackney is a good place to run such events:

“Hackney is a great place to run these kinds of events. There is a huge arts scene and a very vibrant activist/squatter community, which works perfectly in terms of having a total lack of respect for boundaries of where certain art should or should not be held. It also means there are is a huge pool of interesting artists and performers with loads of different things to say in the local area.”

And finally, going forward, I ask him what the plans are for ‘The Spoken Sedition’  and which spoken word artists he hopes to put on across Hackney for future events:

“In terms of more well-known performers, Kate Tempest, David J and Polarbear down there. It would be amazing if we could get those guys but they’re so popular now that it’s a question of fingers crossed. In terms of other thoughtful, interesting poets I’d love  to get down there, I’d want (and heartily recommend you check out): Raymond Antrobus, Christian Watson, Pete The Temp, Danny Chivers, Rik The Poet-Tree Man, The Antipoet, Vanessa Kissule, Paula Varjack, Laura Dockrill… too many to mention! ”