A conversation with Hoxton based composer Stuart Wood 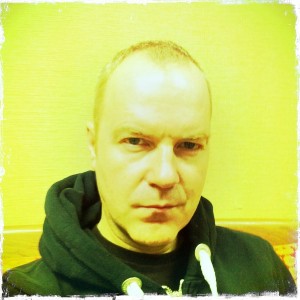 Stuart Wood is a Hackney-based composer who not only scored the notorious ‘Go Compare’ television adverts but also devised and wrote the original Music Hall piece ‘Frank’s Closet’, which drew crowds to Hoxton Hall last year. In his studio, in Hoxton Works, he talked of his career and how he finds Hackney as a creative community.

MD – You grew up in Grantham, Lincolnshire, do you think it informed your career? Would you have been a different kind of person if you grew up in East London?

SW – Probably if I ‘d grown up in East London I’d have had more distractions. Growing up in quite a rural town where there wasn’t even a cinema meant we had to create our own distractions, which for me meant forming a band. There wasn’t really anything else to do, but that.

MD – Did you moonlight in several bands as a teen?

SW– Yeah I did. Basically when I was 18, 19, I started to come down to London and play gigs. The thing that got me here permanently was I played accordion on the Song for Europe, which was for the Eurovision Song Contest. An incredibly sort of camp introduction to London, bringing my accordion down on the train!

MD – Was it difficult to find your feet in London?

SW – Well I used to busk at South Kensington tube. In an hour I would probably earn forty or fifty pounds, which was quite a lot of money twenty years ago. It was more than a giro. I did used to play until my hands bled!

MD – Not soon after did you land the amazingly titled ‘Thunderpussy’ gig?

SW – (Nodding) That project was inspired by international travel and espionage movies in a time before James Bond became cool. It was just a lot of fun and MCA gave us a recording contract. They were spending lots of money on us. I don’t think they spend £30,000 on a music video now.

SW – It was great. I wish we could have done more with it.  I still have about twenty ‘Thunderpussy’ songs.

MD – Where did you then professionally train?

SW– Very fortunately I got on the music course at Goldsmiths. I remember sitting in the audition and them asking me what a C13 was and I thought it was a hopper bus that you catch into Kensington High Street and-

MD – Since you graduated you have worked as a composer for the Jeff Wayne Music Group. Do you have one advertisement that you are particularly proud of as a piece of music?

SW –The Audi Commercial. It was about the car almost sort of playing itself musically. That I think was successful. I’ve since left the Agency to explore more of an independent voice.

MD – Does this include your original musicals? How do you feel about it as an art form?

SW – Well you have to tell the truth. Essentially it’s a very untruthful art form, people bursting into song in colourful costumes. This means the content must be very truthful otherwise you cannot engage your audience to suspend their disbelief. The function of theatre and film is to confront people with life. It’s a cathartic experience rather than an escapist one. Musicals are a very human experience.

MD – Including ‘Frank’s Closet’? (Last year’s hit performance). Any chance of a repeat run for those who could not catch it the first and second time it was on in Hackney?

SW – Possibly. We did it in the summer on a bit of a shoestring with some Arts Council money and with a lot of goodwill from the theatre. Of course we had Debbie McGee in the cast as well!

MD – Have you plans and ideas to use the space at Hoxton Hall again?

SW – I’d love to do more stuff there. The first day I moved in I said this is going to be my project. Hoxton Hall is a very unique sort of Hackney thing. It has a good energy.

MD – Do you know anything about its history?

SW – Well the theatre is technically owned by the Quakers. It was the Temperance Societies of the late Victorian times who closed down the Music Halls because they thought they were bawdy and had naughty activities going on. They aimed to turn them into places of worship instead. However, 120 years, on what they actually did was protected it. Saved it. The fact that they took it on meant it remained at the heart of the Hoxton community.

MD – Beyond that particular venue, are you working on any new musicals?

SW – Yes, actually I had some Arts Council Development money before the cuts.

MD – So do you feel quite personally about the cuts?

SW – I think that it’s a false economy in many ways. My understanding of arts funding is that for every £5 spent on the arts, £15 comes back into the economy. So it’s a really good investment.

MD – And you and the Hoxton community presumably have benefited greatly from Arts Council money?

SW –It was absolutely essential to ‘Frank’s Closet’. Plus you can’t put a value on having a great piece of bawdy theatre in this community. People are attracted to Britain because of our cultural industries. But artists will always find a way. You take money away from artists, it doesn’t stop them being creative.

MD – How do you find this area to create in? Can you imagine being anywhere else?

SW – No. Not at the moment. As soon as I get onto Hoxton Street I can just feel this mad creativity. Sometimes I get off the tube and I’m actually running to get here. I think there always has been something creative about this area of Hackney. Going back to Shakespeare’s time when he had the theatre on Curtain Road, right up to the Brittania Music Hall, which was bombed in the Second World War.

MD – What do you think makes Hoxton this way?

SW – It’s something to do with it being on the edges of the City and it being a freer place. Sometimes I have to go to Liverpool Street Station and there is a restriction. The way people dress. The way people behave. When you step into Hoxton there is an immediate feeling of freedom. Freedom to create.

MD – On your website you talk of your civil partnership. Do you find Hoxton a receptive area to live in, a gay friendly area?

SW – Hoxton is a place where there has always been otherness. Be that the Turkish community. The dwarf community. All the elderly people who have lived here. The influx of young people. I think there is a tolerance and I think people have to confront their prejudices much more because there is so much of a tight community of otherness here. The great thing about Hoxton is everyone talks to you. People do use their voice. It’s a very refreshing aspect of this part of London. There is room for everybody here.

(With a laugh) Being a gay composer, working in Hoxton, yeah it probably looks on paper, a little bit clichéd! I don’t think of it like that.

MD – How does Buddhism affect your life?

I have been practicing Buddhism for 20 years. I chant Nam-Myoho-Renge-Kyo and like music the rhythm and vibration has a positive effect on the way I feel and act. Buddhism focuses on the creative aspect of life; not just creative in terms of the arts and culture but in people’s ability to create value out of any situation.

I have found that the imagery of the lotus flower blooming in the muddy pond as a symbol of finding creative solutions out of difficult circumstances incredibly helpful. At the moment I am composing a cantata for voices and percussion as part of Yorkshire’s Cultural Olympiad and in my search for a text for this work I found great inspiration in the idea of a change in one person can affect the destiny of whole of humankind. The piece is called, “When I move, the world moves too.”

MD – Finally, what does the New Year hold for you?

SW – I’m currently working on a project up in Leeds with the Leeds Youth Choir and Yorkshire Youth Choir and the Leeds Percussion ensemble for the Yorkshire Cultural Olympiad for 2012. Creating a piece of legacy music. Who knows it may be performed during the time the Olympics is on.

One Response to "A conversation with Hoxton based composer Stuart Wood"