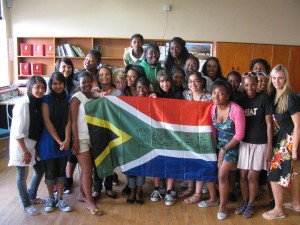 Young people and staff from Hackney Quest as well as students from Trafalgar High School in Cape Town and young people from Stars From Tomorrow Charity also in Cape Town.

For 9 months they worked tirelesly to raise the over £12,000 they needed for the trip and project, by running various fundraising events which included raffles, completing a midnight sponsored cycle to South Africa House in Trafalgar Square, bake sales, bag packing at Tesco, car washes, car boot sales and more. With a cash injection from both the Youth Opportunity Fund and Jack Petchy Foundation The funds raised paid for their flights and accommodation as well as covering the cost for activities, meals and transport for the SA youth group to participate which they would not normally have the opportunity to do.

While in Cape Town, the Hackney youth group ran several workshops regarding inter-cultural dialogue with an aim to learn more about different cultures and share the challenges and opportunities for young people in their areas.

They also led a workshop that focused on the issues of youth and sexual health, as well as on young people feeling empowered to make right and informed choices.

A documentary was filmed about their everyday lives which explored what it’s like to be a young person, in their respective countries and their hopes for the future.

The trip found them spending two days in the Langa township where they volunteered at the Ikhaya Labantu homeless shelter, helping with child care at the shelter’s crèche, along with the monthly food shopping and fun things as painting murals on classroom walls.

They also had fun taking in some of South Africa’s historical and tourist sights including Table Top Mountain, District 6 Museum, Parliament Building, the World Cup Stadium and Robben Island where Nelson Mandela and other anti-apartheid activists where imprisoned for decades.

Keeley Williams, Youth Participation and Volunteer Manager at Hackney Quest said: “Both groups all come from diverse backgrounds and have overcome many obstacles to achieve an outstanding nine days of exploratory work, and they hope to continue making a positive difference in their communities”.

Hackney Quest is a remarkable local non profit organization, that has been working with young people aged 9-18 since 1988, who are potentially at risk through social, economic and educational disadvantages.