Going the whole nine months – A Doula in Hackney 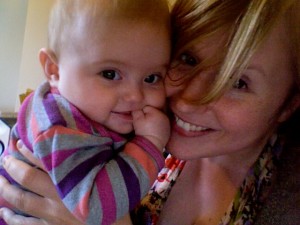 Hackney based Doula, Rebecca Schiller and her daughter.

Is this a passing trend for self indulgent hippy-style-new-age pregnant women or do doula’s actually play a vital role in child birth?

A Doula is a companion to a pregnant woman who generally begins assisting and supporting her during pregnancy, through the actual birth and provides post natal emotional and practical support. Deriving it’s name from the Greek for female servant, it’s not a new concept. Women have helped women giving birth through out time. They have been midwives, our mothers, sisters, other family members, village elders and wise women.

That was yesterday, now it’s all gone commercial and trendy, you can pay to have someone be there for you when you give birth.  Nicole Kidman did.

Rebecca Schiller is a Hackney based doula, who currently describes herself as a ‘trainee doula’.  Even though they do not require training or any type of certification, Rebecca like many others who sign on with Doula UK, a network of Doulas, who are the closest thing to any type of ‘regulatory board’ are encouraged take recognised courses.

She is just one of an estimated 1200 doulas currently offering their services in the UK, and some say filling the gap created by a chronic shortage of NHS midwives.

Explaining why she became a doula she said: “When I was pregnant with my daughter, being an over preparer, I became interested and researched all I could on pregnancy and birth and came across the concept of having a doula for my own birth and I think it was a combination of working with a doula and seeing the benefits first hand as well as realising through my own research, that it was something I was seriously interested. After I had my daughter it just seemed like a natural next step.

“I’d had a really positive experience with my baby’s birth, which a lot of women don’t have and felt part of that was due to having a doula, preparing in advance and having our eyes open to different ways of managing a birth. It’s when I realised it was the perfect thing for me.”

Upon completion of the recognised courses followed by required hours and assessment by a mentor a doula moves up to being a ‘recognised’ doula.

With fees ranging from £200 to £1000 it’s not surprising what groups of women are aware and can afford to hire one. (Trainees tend to charge a lower rate).

Schiller explained that the women contacting her are usually between early 30’s to 40’s, varied careers and backgrounds but agreed there was more ‘awareness’ amongst those who attended paid for ante-natal and yoga classes, as they tend to have affiliations and relationships with doulas as well as talk about doularing, “you find that women with no access to these sort of services aren’t as aware.” She added.

Some are first time mothers, other’s either had a positive experience with a doula during their first birth and some had horrendous experiences so decide on a birth assistant for their next child. Her duties could be anything from holding the mum to be hands, to massage or even throwing some clothes into the washing machine or keeping the other children occupied for a while.

Some Doulas will work pro bono with local health authorities, midwives, social services and children’s centres, thanks to a hardship fund set up by Doula UK, often helping those on benefits or teenager mothers.

But not everyone sees the burgeoning doula ‘market’ as a good thing. Last year Dr Abhijoy Chakladar a trainee in anaesthesia, said in an article in the British Medical Journal the “doula business” could be exploiting women’s fears about the quality of NHS care and the “seemingly limitless market for birth related products and services.”

It appears Dr Chakladar got a little miffed after an encounter with a Doula while attending a labour. He felt the Doula had undermined his authority and swayed his patients decision.

“In this clinical situation the presence of the doula swayed the decision-making incorrectly,” he wrote.

He added “Both the mother and father were confident and articulate, so I couldn’t help but wonder why they needed to pay for support.”

Feelings towards doulas are mixed amongst medical professionals most site what they feel can be a hindrance, when a doula is involved. Even Rebecca Schiller’s father, a doctor himself, didn’t think much of doulas, but has since come round to another way of thinking since observing first hand benefits through his daughter.

On a discussion site for midwives, one made the following comment:

“I have had two experiences of working with doulas when caring for women in labour- one overwhelmingly positive, a real team effort in looking after the particular woman and her family – a positive outcome for everyone.  The other experience completely opposite – the doula aggressively challenged everything that was suggested, impeded any chance of developing a relationship with the woman. I have never felt so distrusted.  It was as if she thought I might suddenly pounce on the woman at any moment with all manner of interventions!  I like to think that as midwives, we are protectors of normality and have to stand up for women to avoid unnecessary intervention – this experience made me feel I was the one she was protecting the woman against! Now I know how some obstetricians feel!… ”

However Schiller is insistent about what her role is, she explained: “Having a natural labour (no drugs or interventions) isn’t the doula’s goal. Her only goal is to help the woman achieve whatever a positive experience is for her (and in some circumstances that could even be a planned Cesarean). It’s just that often a natural labour might be the woman’s goal and the ‘side effects’ of having a doula are that you don’t need drugs/interventions as often because you are able to cope better with labour. ”

Benefits of having a trained doula

Information was obtained from Mothering the Mother: How a Doula Can HelpYou Have a Shorter Easier and Healthier Birth, Klaus, Kennell, and Klaus