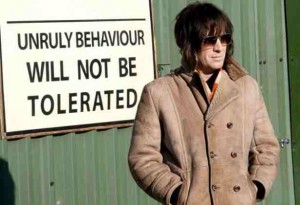 The story begins in humble fashion in a small, welsh town where we are introduced to a studious young man clearly unpopular with his peers – seemingly unlikely beginnings for one of the most wanted future criminals on the planet.

Marks’ life changes dramatically after receiving a scholarship to study at Oxford where he is introduced to a hedonistic world of free love and mind altering substances as the swinging sixties gains momentum.

It is at this moment that the seed is, quite literally, sown to the point where not even a dull, post-university teaching post in London can deter Marks from pursuing a pleasure filled existence. When Marks is then called on to help a friend in need a new found career is born.

As Marks enters this new world he becomes acquainted with a number of interesting characters including an Arabian drug pusher (Omid Djalili) and feisty IRA leader Jim McCann, played convincingly by David Thewlis, who supplies Marks with planes with which to transport supplies of cannabis from the Middle East in return for a cut.

Marks’ circle of friends rapidly expands as his ventures grow ever more successful and international in scope. As a result, so does the risk of reprisal from the authorities, much to the anguish of Marks’ at times long suffering wife Judy (Chloe Sevigny).

Marks’ involvement with MI6 gets him out of trouble on one occasion, but the secret services prove unable to lend their protection for a second time as Marks’ crimes finally catch up with him and he is forced to serve seven years in a US federal penitentiary.

By teaching his fellow inmates to read and write, however, Marks is able to redeem himself resulting in an early release from prison and an ensuing reunification with his wife and children. Free to tell his story to the world, Marks revels in his new career as a master of the spoken word.

Marks’ tale is performed and narrated assuredly by fellow countryman Rhys Ifans whose subtle charm and dry wit carries the picture to a satisfactory conclusion. Just as Morgan Freeman seemed destined to play Nelson Mandela at some stage of his career, Ifans enjoys a similar experience here. Yet, Ifans’ portrayal is by no means the only highlight. Chloe Sevigny is equally convincing as Marks’ more cautious other half, whilst David Thewlis, gives a stupendous performance as the foul-mouthed, volcanic Irish republican Jim McCann.

Whilst not succeeding in driving home any particular moral argument for the legalisation of cannabis (as seemingly promised at the beginning of Marks’ dealings), Mr Nice is a lively, stimulating film with a story told at an appropriately brisk pace leaving the viewer with little doubt that the nickname of its lead character is anything but.