One of our runner up winners, Stuart,  took his family to the Lollibop Festival in Clissold Park yesterday but was lucky to have the whole family allowed in free.  Runner up prize was 1 child’s ticket. Here are his thoughts on the 2 day event. 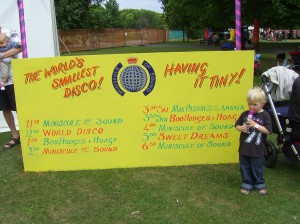 Children and festivals don’t mix. It’s a fact that some parents choose to ignore in the relentless pursuit of those hazy, lazy, carefree pre-children days. Give it up guys – they’re never coming back.

Maybe the organisers of Lollibop are on to something. The event, which was held for the first time on 17-18 July in Clissold Park, Stoke Newington, offered a decent day’s entertainment that kept both ankle biters and their minders entertained. 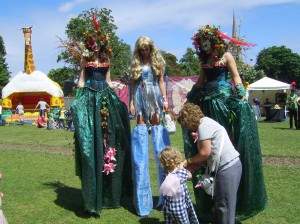 Arriving just after noon, I heard the security guys on the gate telling some curious onlookers, that only adults with children could come in. The wrist bands for children and reminder to write their name and phone number was a nice touch, and made it feel more like a school’s outing.

Indeed Lollibop had a pleasantly home made feel to it, which is not bad for a festival put together by a professional events company – I hope I’m not damning Continental Drifts with faint praise, it’s meant to be a compliment. The old Stoke Newington festival was gloriously noncommercial and a great example of community involvement. I’m sure it’s a touchstone for these kind of events.

The site was pretty big but pleasantly not too crowded. Not such good news for the organisers I’m sure, but great for parents and children who were able to take advantage of the activities without waiting for too long.

There was plenty to get excited about (if you were four years old) and to be thankful for if you were a bit older. A small petting zoo complete with pony, goats, sheep, stoat, and er goslings (help me here), was a big hit. As were the obligatory bouncy castles and craft activities. I loved the clean loos (complete with loo paper and a flower) and baby changing and feeding facilities.

Mums and dads could also enjoy a craft pint from the ‘adult crèche’ located near to the music stage. My highlight of the day was the Bikini Beach Band, whose surf rock version of Popcorn is still stuck playing in my head. Another nice touch was the opportunity to purchase ear defenders for youngsters. It wasn’t that loud, but it showed sensitivity.

As a paying event, the big question has to be, was it worth it? I didn’t pay for my ticket, and would probably have baulked at the £53 on the day cost of family entry. However, compared to an afternoon at the cinema, bowling or even swimming, it was competitively priced, and positively cheap compared to taking the kids to see Arsenal at the nearby Emirates.

The problem for the organisers is that Hackney is blessed with so many great free events in summer. I had seen elements of the show, such as the Albion pirate ship and soft play area at recent free events on London Fields for example. The nearest comparison with Lollibop is probably Paradise Gardens in Victoria Park, which was completely free. Of course, it was largely funded by the local authority and it may be that there as the council looks to make savings, it is less able to be generous to such feel good activities.

Will enough people pay for Lollibop to make it viable in future? Only time will tell. We certainly felt it was a great day and would welcome it back next year, even if we had to spring for the tickets this time. 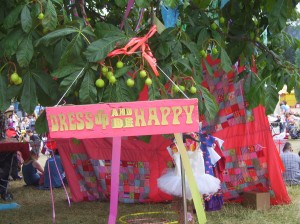 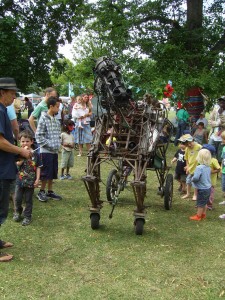