One to Watch: Martin Lau (photographer) 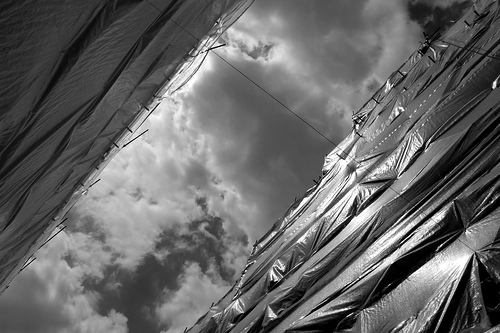 Martin Lau is a London-based photographer and filmmaker who works frequently in Hackney. His most recent subject, Covered City, is currently on display at the NO:ID gallery in Whitechapel

ML – Walking through Fitzrovia, I came across a shrouded development. The district is undergoing a rebranding as ‘NoHo’ [which has been met with much consternation by some residents]. My eyes were drawn towards to what appeared to be a city within itself. I wanted to convey the emotions I got being amongst those buildings.

HH – You live in London; describe your relationship with the city?

ML – When I’m going about town [witnessing  in the rapid redevelopment] I sometimes feel, and I can’t speak for other people, almost like I’m a visitor to in foreign city. I notice the little things, like the little villages emerging.

HH – Which visual artists inspire you?

ML – There isn’t one specific influence, though recently I have been following the work of [French visual arts polymath] Sophie Calle, I really like her work. I’m quite interested in her ideas around creating an experiential project. 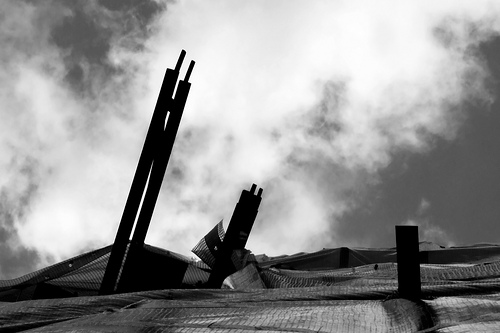 HH – Digital or film – what processes do you employ in your work?

ML – Both. I think boils down to what tools you have at your disposal. The artist will decide what is the best medium to convey their idea.

Take Man Ray, for example, he used a lot of manipulation and gimmickry, for want of a better word, with his solarisation, developing images by moonlight and experimenting with exposure. The most important thing is conveying what you experienced without getting too precious about the means of doing so.

HH – This your second project with the event hosts NO:ID group.

ML – My first association with NO:ID was a sculpture in a group show called Square Up The Decade. We were tasked to create a piece of art that was 15×15 cm sq. It’s due to go on show in Hamburg shortly.

HH – Your creative work encompasses film, music and art. Tell us a bit the music?

ML – Music is a possible exception. Sometimes I wonder if it’s even an art form. I don’t know what music is…I listen to it a lot, I really enjoy it, and it moves me. I’m not a composer though I have performed on projects by others. My most recent session was playing the flute on [Paul Weller sideman’s] Andy Lewis’ forthcoming album.

ML – We walk about town and [much of our focus is at street level] and miss so much beauty. If you look up just one storey you’ll find art deco architecture, pre-war advertising painted on buildings, there’s so much we miss…..I want people to look skywards.

3 Responses to "One to Watch: Martin Lau (photographer)"