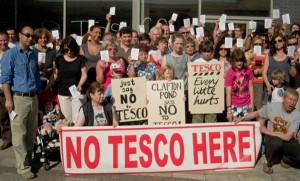 Some residents and businesses in the Clapton area, were outside the new proposed Tesco Express, on Lower Clapton Road, last Sunday demonstrating against it’s opening.

The retail unit  on 144-146 Lower Clapton Road, has been empty since it was completed in 2006 and Tesco does not require planning permission, it does however require permission to make necessary alterations to the loading bay area. Since Hackney Council has little power over who the retail space can be let to, opponents are hoping to convince the council to turn down Tesco’s planning application for extended delivery hours for late evenings and bank holidays.

Understandably local shop keepers and some residents don’t welcome the move and Hackney Hive spoke to residents about the prospect, of having a Tesco on their door step.

Paula Gomez said: “The nearest Tesco is all the way on Morning Lane. I don’t drive so this will be very convenient for my family and I”.

Sherille, a mother of 3 children all under the age of 8, said: “I will still go to the Morning Lane Tesco because they have more variety, but it is good knowing for smaller purchases and emergencies, there is a Tesco in Clapton”. She added, “The corner stores are good too, but they tend to be a bit pricier and not always stock what you need. Things like vegetables tend to be fresher at Tesco”.

Ronke Olayomi from near Millfields Parks said: “Bring it on. While I share some of the concerns of the protesters, I have to think of my purse and I get value for money from Tesco.”

Another resident, Thomas, voiced his displeasure at what he called “An unhealthy dominance”. “It’s not just the local shop keepers who suffer, Tesco bullies farmers and suppliers who have to reduce their profit margins or risk being de-listed”

The owner of the Palm 2 store, Abdullah Solak, said he was worried about the effect the new Tesco would have on smaller businesses in Clapton.

Tesco also has it’s sight on another East London location  in Bromely-by- bow, where they have bought up land and plan on building what many are calling a “Tesco Town”.

454 new homes, 17, new independent retail units, a 104 bed hotel, a primary school and new public park are just some of the  plans Tesco has for the project.