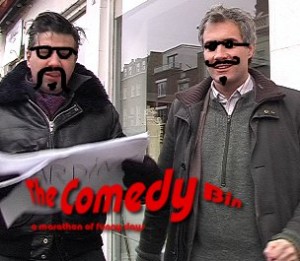 With the apparent demise of the Hackney Empire as a hub for emerging and established talent you may be forgiven for thinking laughter in the heart of the borough was at an end.

While that venue’s renowned New Act of the Year contest seeks a new home, several other platforms for stand up comedy are springing up to fill the void.

One such shining light championing new talent is Comedy Bin. More universal stimulus package than winner-takes-all face off, the ongoing event was originally held at the Empire under the Comedy Box banner. However, while that venue saw its final curtain its orphan has since grown to become a staple of the London open mic circuit.

Run by a collective of former Empire staff Comedy Bin aims to serve up to 15 fine acts on any given night. That’s a lot of bang for your buck, yet it comes for a genuinely unbeatable price. Entry is free.

Hackney-based co-promoter Jay Rechsteiner is effervescent with enthusiasm about the venture “I wanted to create a platform for new comedians, to foster talent, so they can get as much stage time as possible. We’re very pleased at the positive response from the audiences who been coming to shows”, he said when we meet at a busy mid-week show.

Despite the newness of many acts the calibre is high and material innovative, thus attracting a surprising number of seasoned performers seeking a space to experiment and fine tune their ‘bits’.

One such comic who applauds the refreshingly open atmosphere is Aatif Nawaz, who appeared on a bill hosted at Mare Street’s recently-opened Anatolia Bar. “I like what they’ve created here. In Hackney you get to play to some very diverse audiences, I love that! You never know how they might respond and that keeps me on my toes”. With a growing reputation himself, the Wembley-based Nawaz has performed throughout England and even to audiences in Africa and Asia and recently bagged a highly-prised opening slot at a gala event at the Hammersmith Apollo.

With so many acts waiting for their 5 minute spotlight, the flawless turnaround on stage is credit to regular compere, actor Rob Statham. Something of a renaissance man, his broad theatrical experience is clearly evident as he busily attends to almost every technical aspect behind the curtain as well as warming up crowds.

No slouches, the Comedy Bin collective (who also run the popular Variety Box showcase in Stoke Newington) have big ambitions for the venture, which runs every Monday, Wednesday and Thursday in Hackney and neighbouring boroughs.

Having put on literally hundreds of comics I ask Jay for some top picks “There’s so, so many. But you should definitely look out for Arhondia Rocca, Steve Aruni and Lheila Oberman”,  he recommends.

And he’s right,  these acts and others who’ve performed at Comedy Bin are indeed getting high praise from peers and audiences alike.

On parting I asked Jay, whose stock-in-trade is conceptual art, if he had his own comic aspirations. His response is modest and surprisingly honest “I have a lot of respect for comedians, you’ve got to be quite brave to get up on stage. Ooooh….I couldn’t do it.” 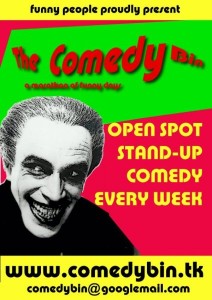 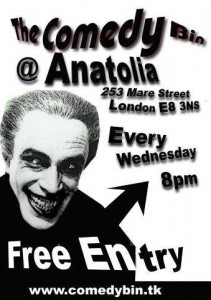